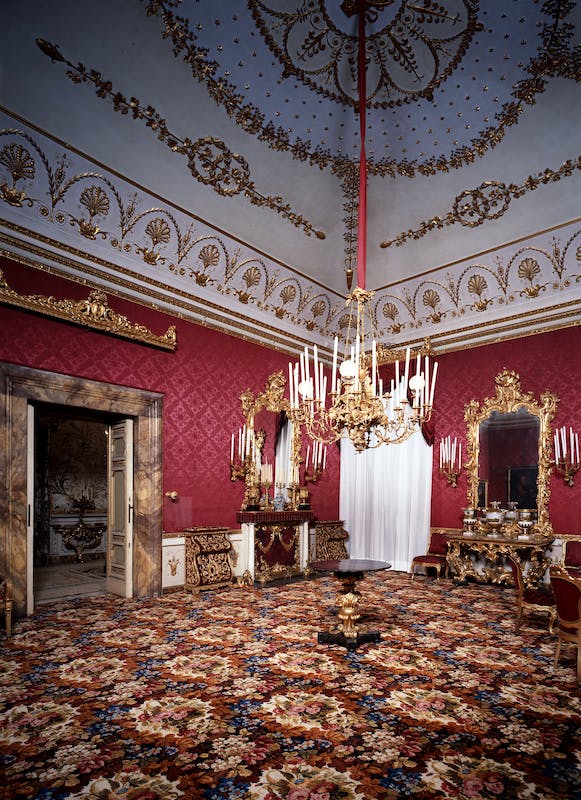 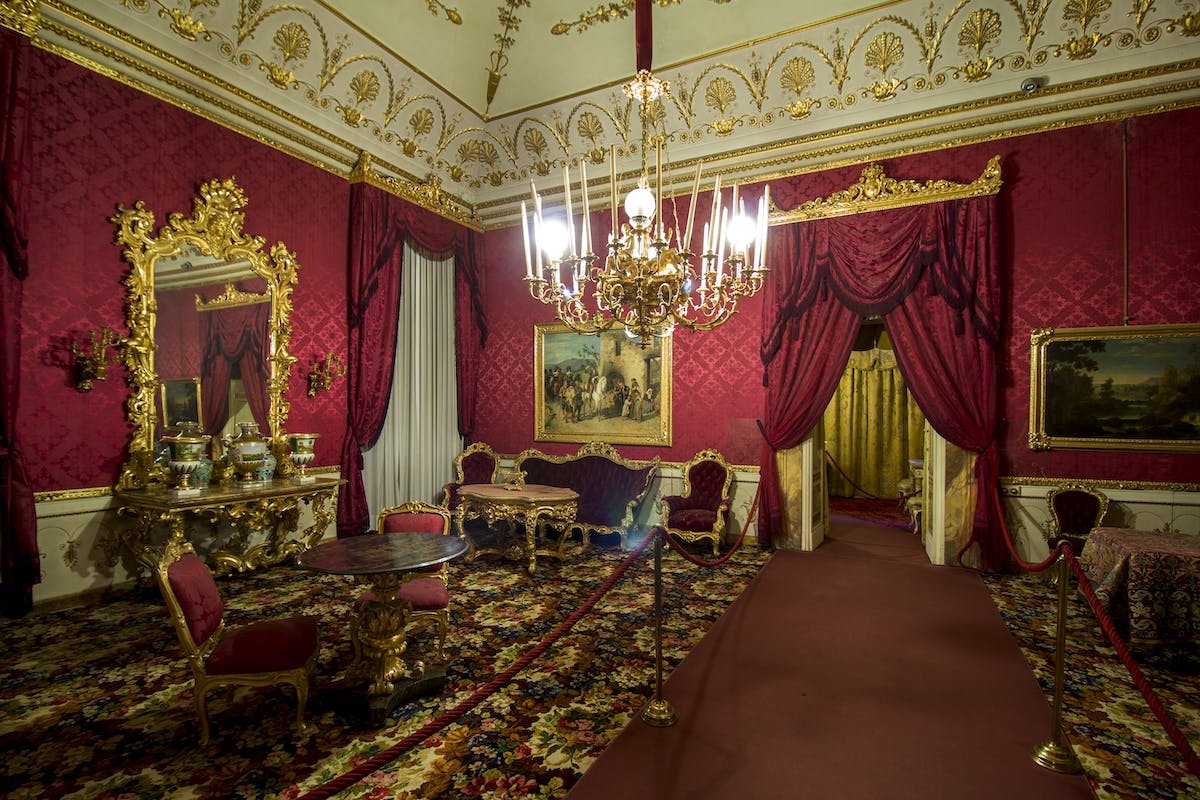 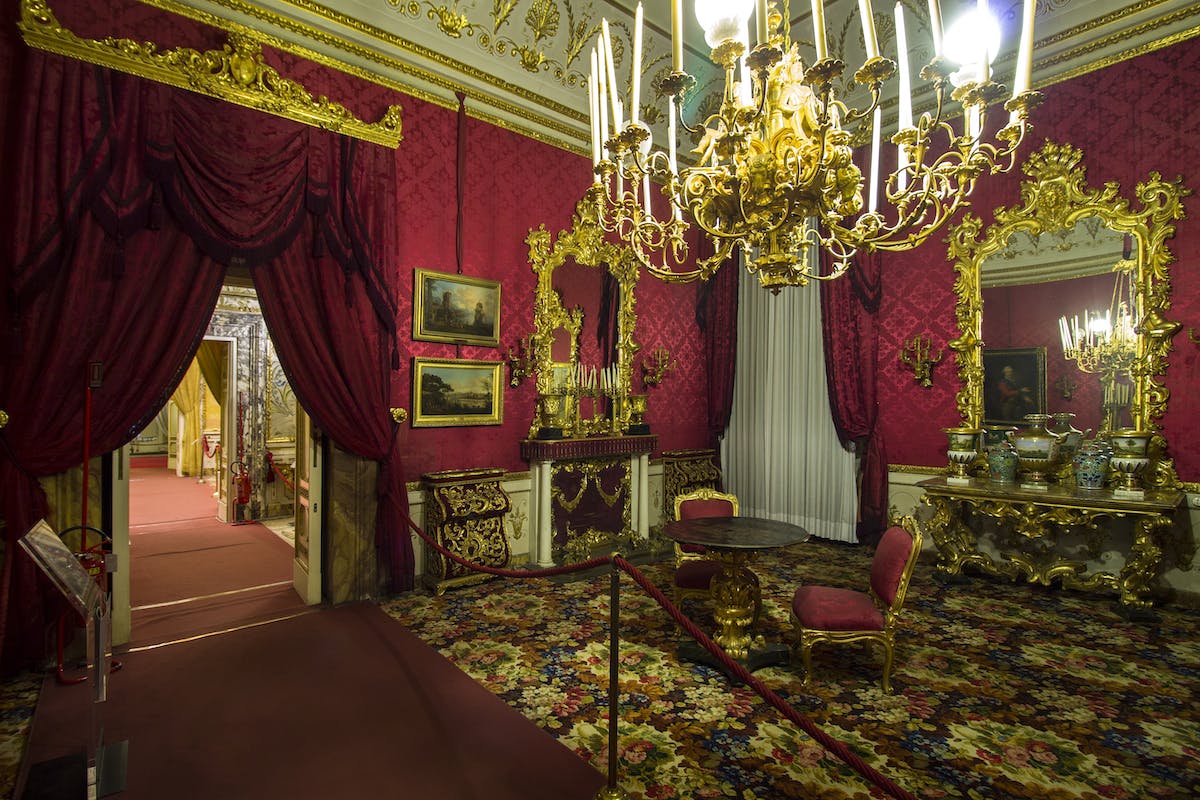 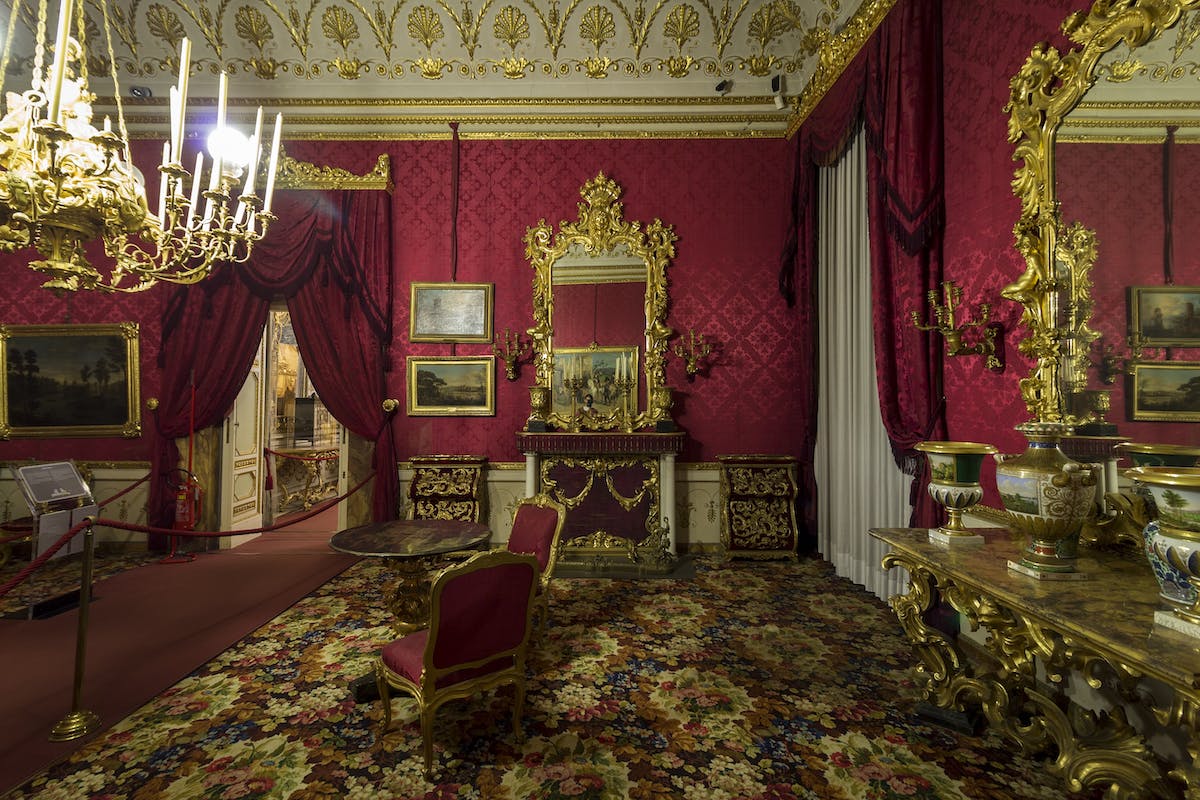 The room, part of the Quarters of King Umberto I of Savoy, was previously the Audience Hall of the Lorraine Grand Dukes. The room has a vault of gilded stucco on a white background, dating back to the 1760s like those of the adjacent rooms, and on the walls is a crimson silk damask with motifs of stars and bees, revealing with certainty its Napoleonic origin. It was in fact made by the Florentine factory Burgagni during the Empire period, on a sample of Lyon silk used at the castle of Versailles, which had come from Paris at the express wish of Elisa Baciocchi. The delivery of the damask to the wardrobe took place after the fall of Bonaparte; in spite of the alternation of dynasties, as can be said for other furnishings in the palace, the fabric was installed in 1823. Later, during the Savoy period, the room took on the appearance of a drawing room, thanks also to the carpet with large polychrome flowers, similar to that in the King's Chamber - and like the one sent to Pitti from the Royal Palace of Parma - close to the more bourgeois taste of the second half of the 19th century.

On the other hand, this style was more in keeping with the preferences of Victor Emmanuel II who, in anticipation of the capital's stay in Florence, purchased at the 1861 Italian Exposition, held in Florence in the Leopolda Station's pavilion, the set composed of a sofa, two armchairs, six chairs and a table, in carved wood, gilded and covered in crimson velvet, produced by the Turin firm of the Levera brothers. Also thanks to the king's initiative, the Tuscan artist Giuseppe Ciaranfi was commissioned to paint the canvas depicting 'The Alms of the Collar'. The work, delivered in 1866, reproduces an episode of generosity of Victor Amadeus II, first king of Sardinia, which took place in 1691, when the sovereign donated the precious collar of the Annunziata, symbol of the Savoy family, to the poor of Carmagnola razed to the ground during the so-called 'Nine Years’ War' or the War of Succession of the Palatinate.