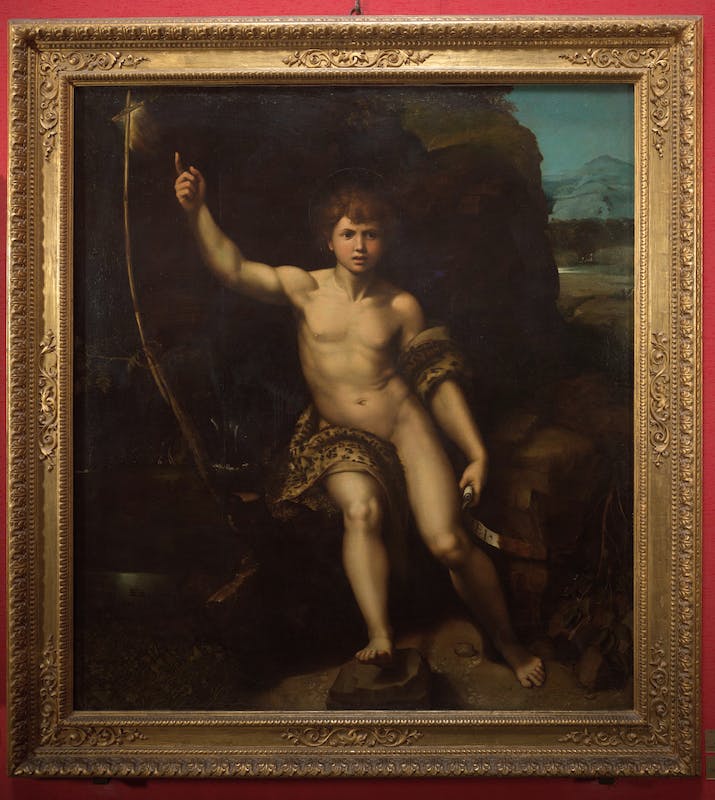 Raphael's St John the Baptist as a Boy follows an iconographical model generated by the medieval hagiographical sources and the Lives or Stories of St John the Baptist, which were commonplace in the 15th and 16th centuries. These writings allude to the young John's early hermit experiences and his habit of wandering deserted forests alone from the age of five, and he is shown having withdrawn to a cave wearing only a leopard skin. The scroll he is carrying in his right hand bears the word DEI, the final part of the ECCE AGNUS DEI formula with which the adult John the Baptist turned to Christ and recognised him as the Messiah, the saviour of men. His left hand is pointing to a radiant cross tied to the trunk of an oak tree, symbolising destiny and Jesus’s sacrifice. The spring of water spurting through on the left, on the other hand, is an allusion to Christ’s purity and the Baptism he received from John himself in the waters of the Jordan river. To the right the landscape slopes away gently to a lake rimmed by a forest, with mountain peaks in the background.

The painting's warm colours highlight the boy’s agile and muscular body, with his pale skin contrasting with the dark rock in a way which echoes an earlier work by Leonardo da Vinci. It is precisely the latter's John the Baptist (now in the Louvre in Paris), which he painted in Florence at the end of the last decade of the 16th century, which inspired Raphael and especially the emotional power of the gesture in the direction of the cross. The nude pose, with the slight juxtaposition of the left leg slightly forward and the foot resting on the stone, reflects Raphael's study of the great ancient world models from Laocoön and the Ciampolini Zeus.

This painting is considered to be the one described by Vasari in both editions of his Lives, having been commissioned by Cardinal Pompeo Colonna who gave it to his doctor Jacopo Berengario da Carpi, from whom it passed to Florentine Francesco Benintendi. Exhibited in 1589 in the Uffizi gallery the work has been the subject of considerable critical debate, with some critics considering it to have been entirely Raphael's work and others seeing the hands of his main pupils Giulio Romano and Giovan Francesco Penni in it. It has been dated to the last years of Raphael's life, in 1517 – the year Pompeo Colonna was appointed cardinal – or 1518.