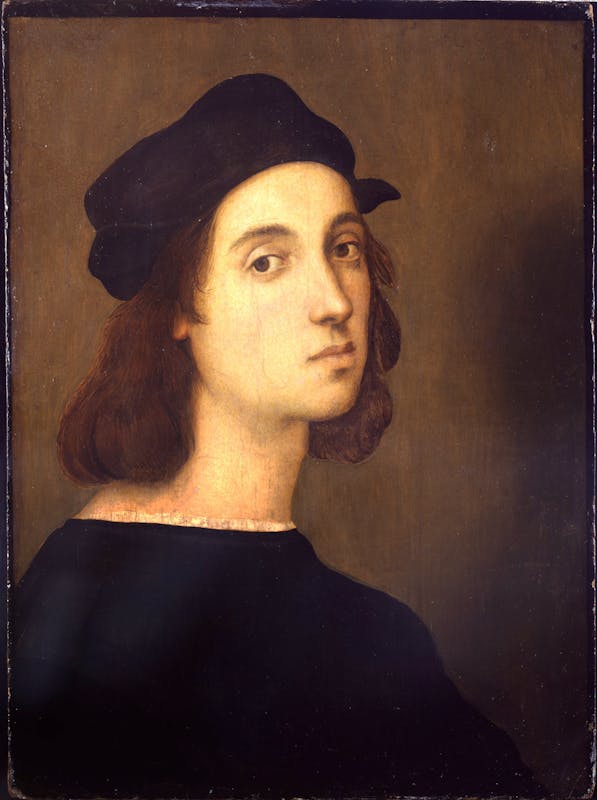 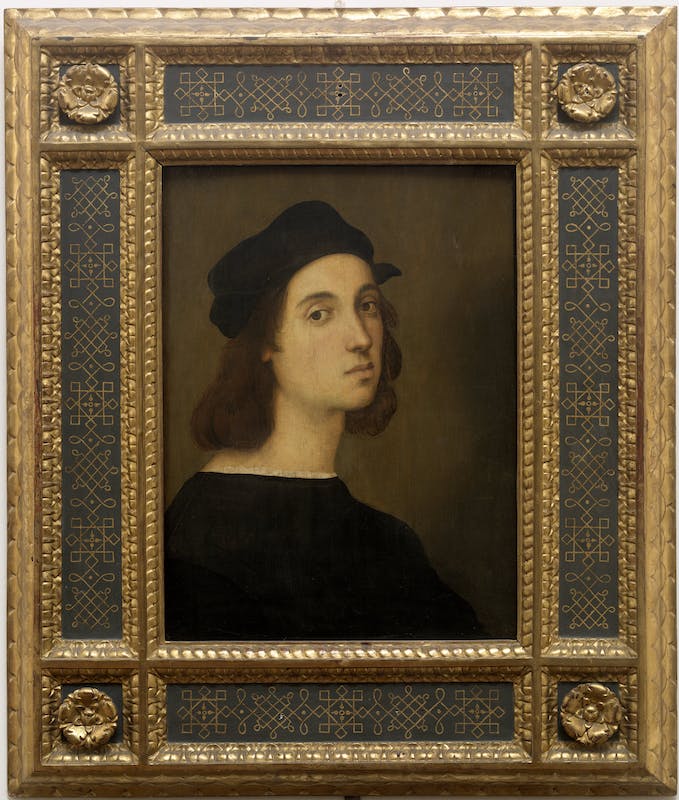 This painting has been acknowledged as the self-portrait of Raphael as a young man, also based on the comparison between this work and the other self-portrait of the painter visible in the fresco depicting the School of Athens in the Room of the Segnatura in the Vatican, commissioned by Pope Julius II and painted between 1509 and 1511. Although painted using different techniques, in both portraits the artist portrays himself with an identical expression and features. His hairstyle and cut are those typical of the court page of the Renaissance and his dark cap, in the style later known as “raffaella”, is of the kind used by painters, as is his dark robe, from which a white shirt is barely visible underneath. In short, he is wearing his simple working attire, an intentional allusion to his trade, which he proudly proclaims here in this way. His dark eyes and graceful features serve to confirm the enthusiastic judgement passed by Vasari on the master from Urbino in his work “the Lives”, praising his “grace, study, beauty and excellent clothes” and his perfection as an artist, and comparing it to that of the painters Zeuxis and Apelles, remembered as the greatest painters of the classical world.

The authorship of the painting was definitely established by the investigations carried out on it in 1983, for the exhibition staged in Palazzo Pitti to celebrate the centenary of Raphael’s birth. On this occasion, using reflectography, researchers were able to view the preparatory drawing and how the colour was applied, observing an exquisite refined technique that consisted in building the picture by applying shiny translucent glazes to a white primed background. These elements confirm the artist’s interest in the Flemish painting of the same age, extremely popular in the court of Urbino, where famous Nordic painters such as Justus van Gent and Pedro Berruguete had stayed.

The fortune of this painting is certainly linked to the legend of Raphael, who had been celebrated when still alive and almost mythicized after his precocious death at the age of only thirty-seven years old in 1520.

The surviving documents tell us that the work comes from Urbino, Raphael’s city of birth, where it was located until 24 September 1652, in the “room” of Vittoria della Rovere, daughter of the last Duke of Urbino and Claudia de’Medici. The fact that the lords of Urbino would have wanted the effigy of Raphael in their rich collection is plausible: in fact, not only was he an outstanding painter, but he was also a source of pride and glory for the city in which he had been born. In the 1630s, Vittoria della Rovere, betrothed to her cousin Ferdinando II de’Medici while still a child, brought the finest masterpieces of her family’s collection to Florence as her dowry. The self portrait was then registered (1663-1667) as one of the “Portraits of painters painted by their own hand” collected by cardinal Leopoldo de’Medici, the first nucleus of his extensive collection in the Uffizi, which still exists and has grown, famous worldwide as the largest, richest collection of its kind.

Although it is not clear how the painting ended up in the hands of the cardinal, it is reasonable to think that it was a gift from his sister-in-law Vittoria della Rovere, rather than believe that it was purchased by the prelate of the Academy of San Luca in Rome.