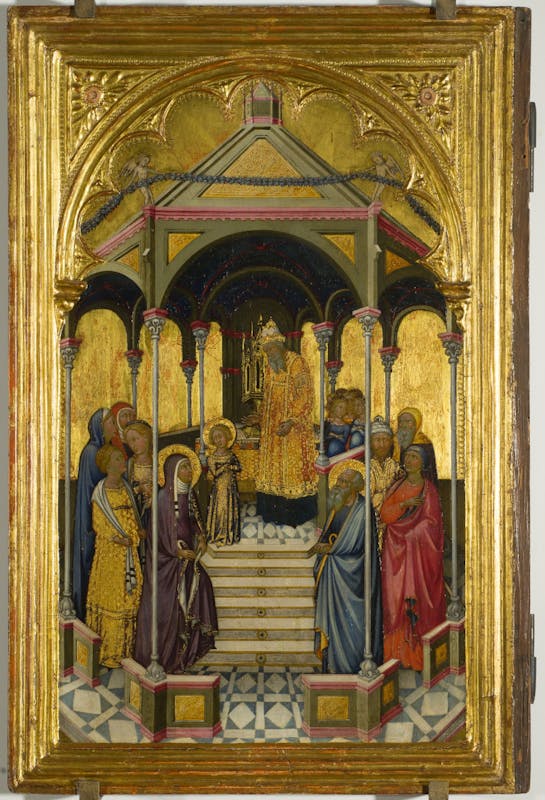 This precious panel with a gold background depicts an episode from the childhood of the Virgin Mary. In the centre of the composition, it is possible to see the young girl being presented to the old priest in the temple, while, at the bottom of the stairs, her parents, Anne and Joachim affectionately watch the solemn meeting in the company of several people; behind a parapet at the height of the altar there is a group of girls who are attending the scene.

It was painted by the Sienese painter Niccolò di Buonaccorso, an elegant, cultured artist working in the 1380s and 90s, who excelled in the creation of small items. His products, influenced by the art of Simone Martini and Ambrogio Lorenzetti, stood out for their formal elegance and the high execution quality, which are clearly recognisable in this case, too, as shown by the skilled use of architectural space, the calibrated balance of colour, and the technical solutions applied to depict the clothing.

One time the painting was part of a more complex cycle dedicated to episodes from the life of the Virgin, and there are two other elements, now in the National Gallery in London and the Metropolitan Museum in New York. We do not know how the panels were originally set out, but considering the easily handled dimensions and the general precision of the decoration, we can suppose that they were conceived in the style of doors, to be visible on both sides. No one knows the period in which the paintings were divided and nor is it known where they were first hung, although the critics would seem to opt for a Sienese context, taking into account that Buonaccorso was only recorded in the city of his birth and that Mary was considered an extraordinarily fortunate subject in Siena.  Before arriving at the Uffizi, the Presentation of the Virgin was in the Hospital of Santa Maria Nuova in Florence in the latter part of the 19th century.