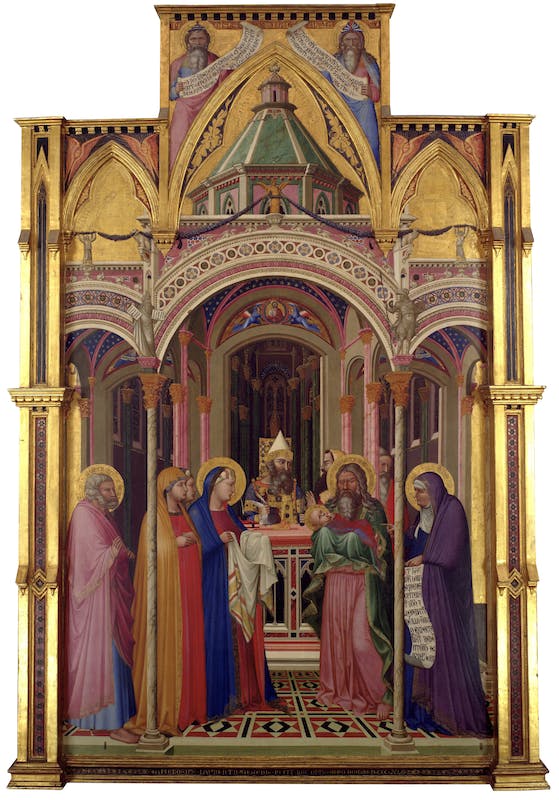 Inscribed at the bottom with the painter’s name and the date, 1342, this masterpiece was painted for the chapel of San Crescenzio in the transept of the Cathedral of  Siena. It was part of a small group of altar pieces, dedicated to the Virgin Mary and her life, painted by Siena’s most important artists in the first half of the 14th century for the five transept altars in the Cathedral.

Ambrogio Lorenzetti’s work shows the presentation at the temple and the purification of Mary, forty days after giving birth, according to Hebrew rituals. Mary, who can be recognised by her usual blue cloak and red dress, is holding her son out to Simeon and to the prophetess Anna, both of whom recognise the Child as being the Messiah. Anna is holding a scroll citing a passage from the Gospels, narrating this event (Luke 22,38). On the altar, the priest is sacrificing the gifts brought by Mary and Joseph. Joseph is shown alone, on the far left. The temple, for which we can see both interior and exterior, according to mediaeval custom, is imagined by Ambrogio Lorenzetti as a church, with columns, starry vaults, paintings and windows. The converging widths of the polychrome marble floor serve to enhance the idea of depth, showing the artist’s interest in depicting spatiality.

The painting is extraordinary for its wealth of details, inspired by daily life, such as the jewellery decorating the women’s ears, or the childish pose of Jesus, who is shown sucking his thumb, giving a highly spontaneous character to the holy subject. The altarpiece is without its original pinnacles and two side panels depicting saints. Originally, therefore, it must have been a tryptych, similarly to the other side altarpieces from the transept of the Cathedral of Siena, like the Annunciation by Simone Martini. At the top, outside the frame, are the prophets Moses and Malachi.