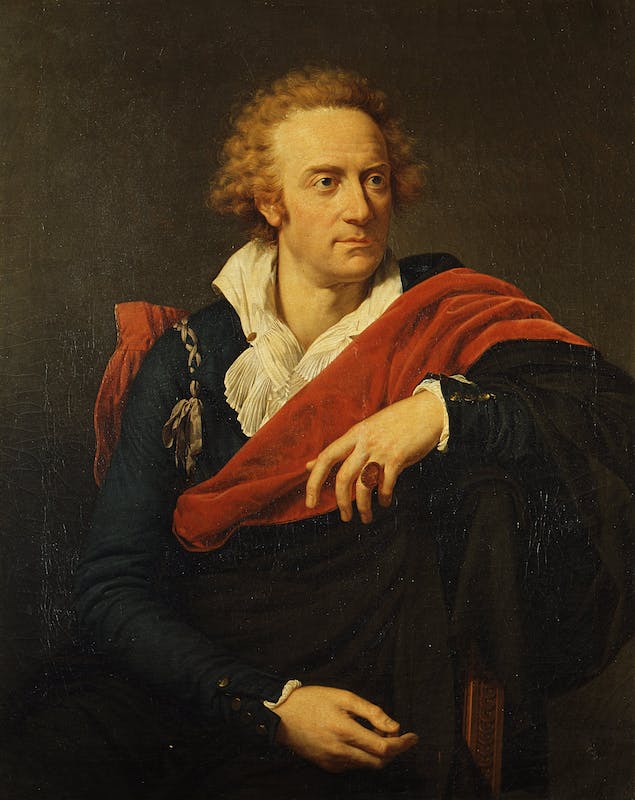 Signed and dated in the bottom right: “F.X. Fabre. Florentiae 1793”. The painting was begun in July of the same year, as Vittorio Alfieri himself wrote to a friend in Siena, when the poet had left Rome for Florence. In Florence he immersed himself completely in the study of Greek classics, and together with his lover, Louisa Stolberg, Countess of Albany [vedi scheda], he was a prominent figure in the city’s intellectual circles. In this portrait, Alfieri appears almost nobly dressed in ancient robes, aware of the civic commitment and high poetic mission that he has undertaken. These values are symbolically echoed in the carnelian stone with the portrait of Dante - in a prominent position on his left ring finger - engraved by Giovanni Antonio Santarelli, famous medal designer, sculptor and engraving, also painted by Fabre (Gallery of Modern Art in Palazzo Pitti, inv. 1890 no. 3304). As a sign of the deep appreciation of the work, which together with its companion piece, a portrait of the Countess  (Inv.1890 no.1008), formed the writer’s official iconography, Alfieri wrote the following sonnet on the back of the painting, perhaps in his own hand:  “Thou mirror of veracious speech sublime, / What I am like in soul and body, show; / Red hair,  - in front grown somewhat thin with time;/ Tall stature, with an earthward head bowed low; / A meagre form, with two straight legs beneath; / An aspect good; white skin with eyes of blue; / A proper nose; fine lips and choicest teeth; / Face paler than a throned king’s in hue;/ Now hard and bitter; yielding now and mild; /  Malignant never, passionate alway, / With mind and heart in endless strife embroiled; / Sad mostly, and then gayest of the gay. / Achilles now, Thersites in his turn: /  Man, art thou great or vile? Die, and thou’lt learn!”