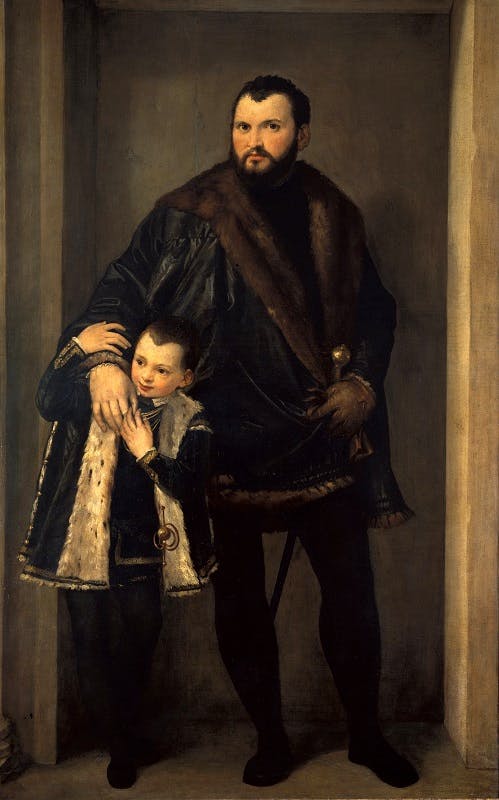 This work depicts Count Giuseppe (or Iseppo) da Porto, together with his first-born son, Adriano, one of the seven children he had from his marriage with noblewoman Livia Thiene, which took place in 1545. Originally, the canvas was a companion piece to another double portrait, of the count’s wife Livia and her daughter Porzia, now in the Walters Art Museum in Baltimore (Maryland). The two canvases were probably hung at the sides of a window, as suggested by the specular origin of the light in each one. Veronese was one of the artists who decorated the palace belonging to the da Porto in Vicenza, completed in 1552 and built by Andrea Palladio. The date can be deduced - with a great deal of approximation - by the age of the two oldest children, depicted in the two paintings.  The period is probably 1552 and 1553, when Paolo moved to Venice and his portrait style took on its more notable influences from Titian, while here he maintains elements of traditional Lombard style.

The subjects represented here are set in a faux shaded niche and painted full length, following a style that was typical of artists between Brescia and Bergamo, such as Giovan Battista Moroni, who was an important inspiration for Veronese.  Giuseppe da Porto is wearing a heavy black tunic, lined with fur and high on the leg. He is wearing a sword in his belt and a single glove, since he has removed the other to place his hand on the shoulder of his son, Adriano. The boy is also sumptuously dressed, with an ermine-lined jacket, decorated with gold embroidery.

This portrait is a famous work from Veronese’s young period and includes fundamental elements of his style.  The colour range is very well defined, with particular style characteristics, such as the bold iridescences, making it different from the tonal painting style of Veneto. The textured depiction of the sumptuous fabrics, furs and jewels is most important, making this piece one of the most extraordinary examples of 16th-century portrait painting.