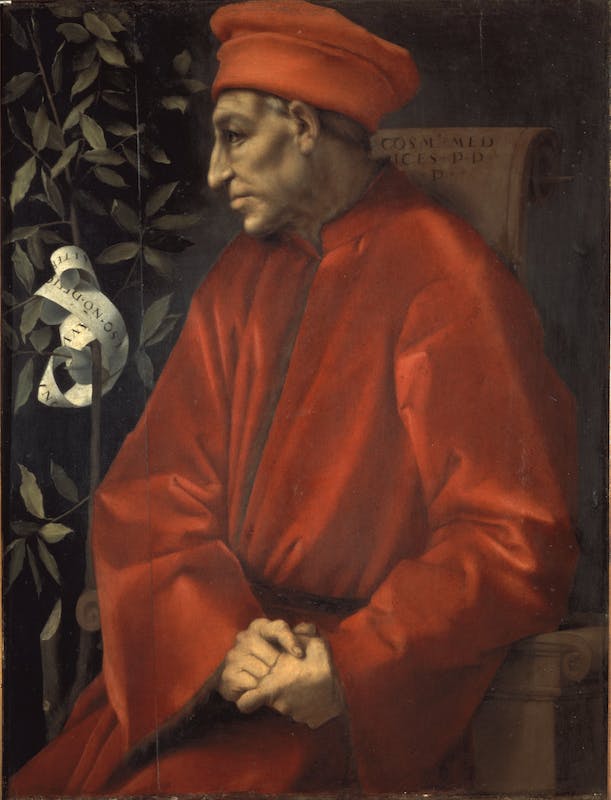 Cosimo the Elder was born in Florence on 10 April 1389, the first child of Giovanni di Bicci, wealthy wool trader and banker. While carrying on the traditional family business, he also fulfilled political and diplomatic assignments for the Florentine Republic. Considered the leader of the opposition of the ruling oligarchy led by his arch enemy Rinaldo degli Albizi, in 1433 he was exiled from Florence; but in 1434 he was called back to his homeland by popular demand and from then on he automatically became the Lord of the city. Extremely active in all fields, he developed agriculture, boosted trade, completed noteworthy public works, such as rendering the Arno navigable, had churches, chapels and palaces built, named himself protector of all genres of art and promoted the rediscovery of classical literature. Under his rule, Florence became one of the most pioneering cities in Europe, so much so that his fellow citizens assigned him the title Pater Patriae.

This posthumous portrait of him was commissioned to Pontormo by Goro Gori da Pistoia, probably by request of Pope Leo X, originally known as Giovanni de’ Medici. Since October 1519, Gori had been the head of the extraordinary administration of Florence and he had long been the secretary and loyal advisor of Lorenzo de’ Medici, Duke of Urbino, and grandson of the Pope, who had died on 4 May of the same year. The Duke’s death had left the main branch of the Medici dynasty with no legitimate heirs, but the birth of Cosimo on 12 June to Giovanni delle Bande Nere and Maria Salviati, descendant of the cadet branch of the family, renewed the household’s hope. In line with the wishes of the Pope, his godfather, the child had been baptised with the name of the head of the family.

The task of developing the symbolic meaning of the painting is thought to have been entrusted to Ottaviano de’Medici, a character of great, refined culture and curator of the artistic commissions of Pope Leo X.

Cosimo the Elder is depicted in profile, in line with an iconography handed down from the medals coined after 1465, the year in which the Signoria had endowed him with the title of Pater Patriae. His red velvet cape and hat are of the kind usually worn in portrayals of the saints Cosma and Damiano, protectors of the Medici family. The three Ps sculpted on the back of the chair, which identify Cosimo as “Father and founder of the homeland” [Pater Patriae Parens], are a reference to an ancient coin bearing the profile of Cicero, a famous character to whom Cosimo was often compared.

On the left, the Medici emblem, the vine-prop, is visible: this was a branch broken off the laurel tree from which a new shoot had developed, symbolising the continuity of the bloodline. Instead, the motto on the scroll reiterates that ‘one broken branch does not weaken the other’. The motto is taken from a passage in the Aeneid, in which Anchises prophesies to Aeneas the future of his bloodline and the foundation of Rome. This appears to support the theory that the painting had been commissioned to celebrate the birth of Cosimo, who would go down in history as Cosimo I, the first Grand Duke of Tuscany.