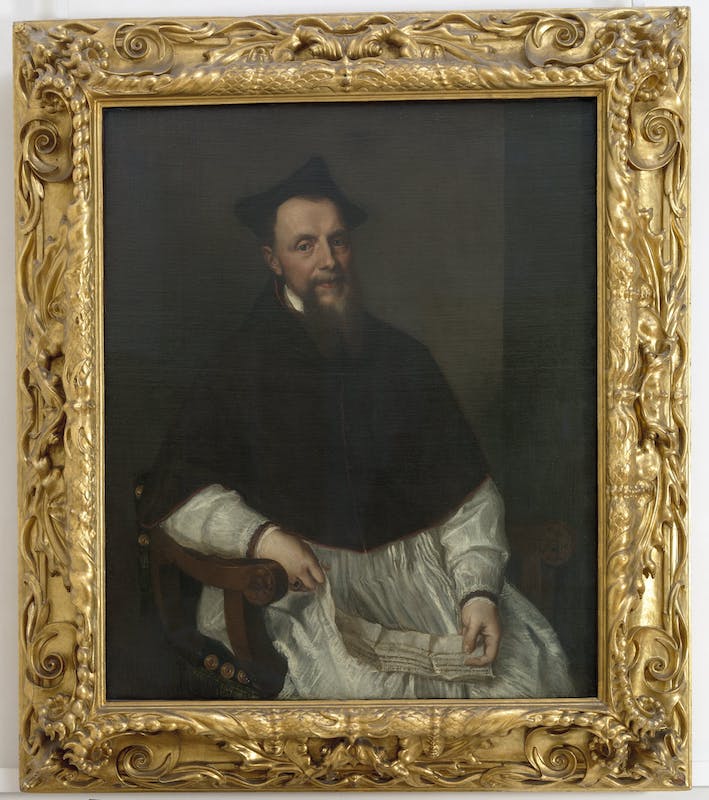 The painting is one of Titian’s portraiture masterpieces, and it was painted in Venice in 1552, as documented by the letter unfolded in the hands of the bishop. It is easy to see the inscription with the artist’s name and that of Ludovico Beccadelli, marked by the titles Bishop of Ravello and Apostolic Delegate in Venice, conferred by Pope Julius III.

The work was immediately praised by Pietro Aretino, in a sonnet celebrating the qualities of its likeness to the model, and the ability of Titian to convey the calm and at the same time authoritative character of the subject through his painting.  Beccadelli was in fact an important personage in the circle of “spiritual leaders” or those who advocated a renewal from within the Church, during the difficult period of the Counter-Reformation.

The portrait was purchased by Leopoldo de’ Medici in 1653; its provenance from the Bolognese market is certified by correspondence between the Medici cardinal and his agents, who with particular care and dedication, concluded the negotiations for the purchase.  Leopoldo de’ Medici, who preferred the iconographic subject of the portrait would have been familiar with the figure of the Bolognese bishop, not only due to this latter’s qualities as a fine man of letters, diplomat and also biographer of important humanists such as Pietro Bembo, but also because Beccadelli had spent almost a decade in Florence, from 1563, as the tutor of Ferdinand, son of Cosimo I.

The excellent quality of the painting meant that the portrait was displayed in the Tribuna for many years during the 18th century.