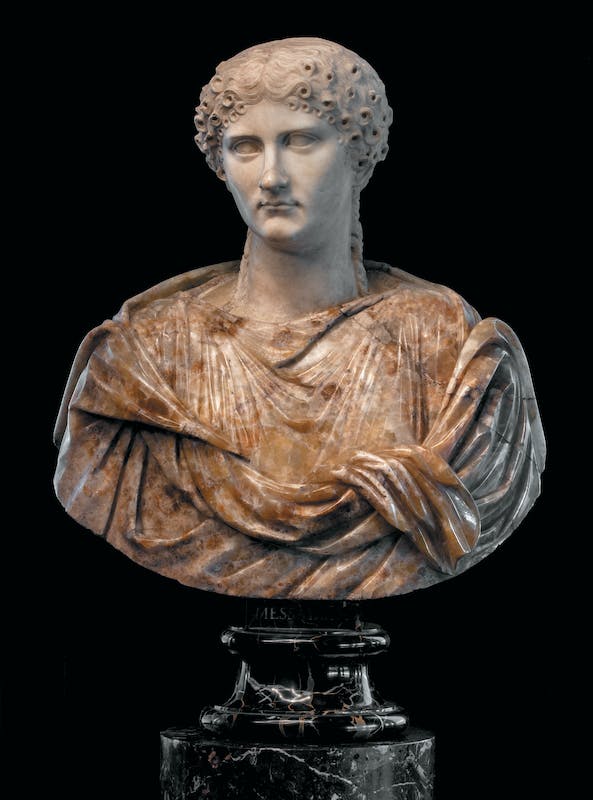 The sculpted head reproduces the features of Agrippina the Younger, set on a splendid modern alabaster bust. An inscription traced on a hem of the robe, level with the left breast, dates the modern bust to the year 1652. The curls are arranged in three rows on either side of the face, with a series of short, flat ringlets framing the forehead and temples, and "corkscrew" curls hanging down at the neck. This is essentially an updated version of the hairstyle of the subject’s mother, Agrippina the Elder. The portrait is of the "Milan-Florence" type, which takes its name from the places where the most important replicas are housed, and it can be dated to the years of Agrippina the Younger’s marriage to the Emperor Claudius, between 49 and 54 AD, although the half-moon diadem that usually characterizes portraits created after the conferral of the title of Augusta, in 50 AD is missing.

Agrippina the Younger is a key figure in the history of the Julio-Claudian dynasty; she was in fact the first matron to find herself as sister, wife and mother of a prince, a condition that brought her to the center of the political scene. She experienced all the possibilities and the risks of this scenario, the latter exemplified in her becoming the target of the classic accusations made in Rome against women, namely sexual immorality and being guilty of poisoning. Officially, she was exiled under her brother Gaius for a charge of adultery, but the real reason was probably her suspected involvement, along with her sister Livilla, in a conspiracy against Gaius. She was called back to Rome by her uncle Claudius, whom she married in 49 AD. Now Augusta, she was blamed for the murder of her husband by poisoning, in order to facilitate the transfer of power to his first-born son, Nero, under whom she almost came to exercise a co-regency, until Nero’s desire to limit her influence led him to kill her.

The provenance of the portrait is unknown. In all likelihood it entered the Gallery at the beginning of the 18th century, when the head was placed in the Tribuna, as also confirmed by the 1772 painting by Johann Zoffany, "The Tribuna of the Uffizi". Its present arrangement is probably ascribable to the 1780s, and occurred in any case by 1783, when the sculpture was described in the inventories, complete with the bust.