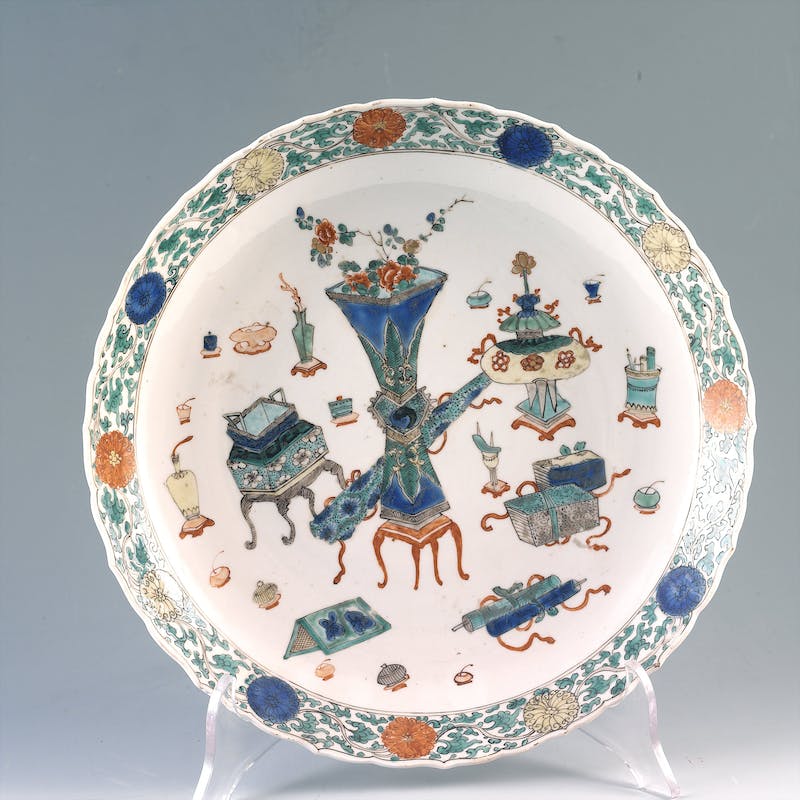 The numerous precious items in the Treasury of the Grand Dukes include various examples of the finest Oriental porcelain. This plate was made in the kilns of Jingdezhen, a city - now a province - in southeast China. The porcelain items made in this area are still the most sought after by collectors of Chinese art, due to their quality and precious nature.

This plate was created in the early 1700s, under the Kangxi Emperor and it depicts a very popular subject for the period: the hundred antiques (po-ku), referring to one hundred items with a strong symbolic meaning.

The centre is dominated by a vase containing a sprig of flowers and with the symbol of the taiji; although this latter has different meanings; the best known is linked to the qi, or vital energy that flows through all things and consists of two opposite forces, which together balance each other out to create the breath of life that passes through every object.   On the right are two tripods, a reference to ancient Chinese ceremonial vases and symbols of both filial piety and respect for ancestors.  In the bottom and on the right of the decorations are some scrolls, two brushes and two small piles of books, elegantly tied with coloured ribbons: these refer to the importance of calligraphy, writing and study, all fundamentally important activities for a scholar.

On the left is a chess board, with its playing surface facing downwards, and a large vase for burning incense, the significance of which is linked to the ancestor cult.

Behind the vase we can see a piece of floral fabric, which should be wrapped around a qin zither (a traditional Chinese musical instrument).

The rim of the plate is decorated with a band of vegetation, covered with red, yellow and blue lotus flowers.

The dominant colours of the decoration are green and blue, which places this item in the so-called famille verte (green family), a group of ceramics mainly decorated in green over the glaze and blue under it.