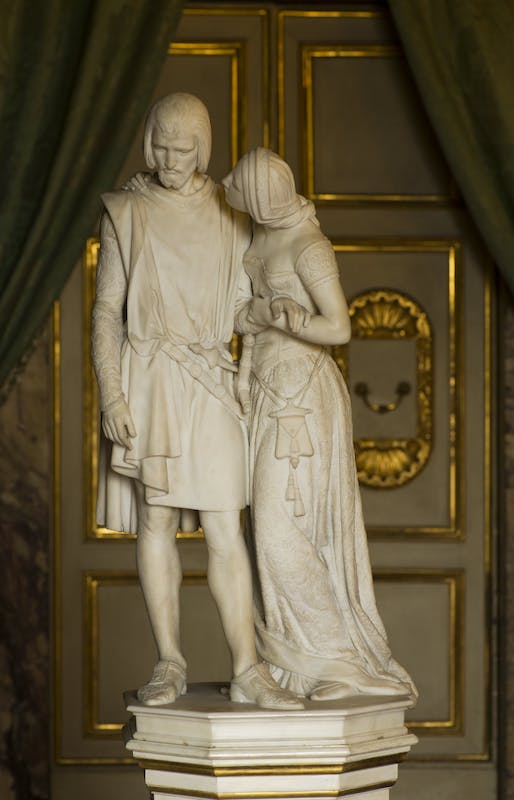 When visiting the studio of Pio Fedi in 1846, the Grand Duke Leopoldo II was able to admire the model of this group for the first time. Pleased with the composition, he commissioned the sculptor to execute the work in marble, asking him to engrave on the base the two well-known verses by Dante “Do thou remember me who am the Pia” “Siena made me, Maremma unmade me”. His choice of quotes by Dante as inspiration was in line with a renewed cult for the figure of the poet, boosted by the discovery, in 1839, of a portrait of Dante Alighieri which, according to Vasari, had been painted by Giotto in the Podestà Chapel. Evidence of this Dantesque revival in the figurative arts can be found in various subjects taken from the poet’s biography or from the Divine Comedy.

The unfortunate story of Pia de’ Tolomei, whose husband Nello unfairly suspected her of adultery and locked her up in his castle in Maremma, where she died of malaria was summarised in a few verses in Purgatory. It had been widely diffused from 1822, when the poem “Pia” by Bartolomeo Sestini, patriotic poet from Pistoia, was published for the first time in Florence. Sestini’s work was a short poem of three cantos in ottava rima, combining Dantesque inspiration with contaminations from Shakespeare’s Othello. Sestini’s version accommodates the theory that Pia’s husband, Nello Pannocchieschi, was jealous due to her alleged betrayal, and that Ghino, Nello’s best friend, avenged Pia’s rejection of his own advances by telling her husband about her alleged secret meetings with a suitor.

As his peers had identified at the time, it was not the verses of the Divine Comedy, but rather this romantic revised version of the Dantesque episode and, above all, Donizetti’s homonymous work performed at the Teatro della Pergola in 1842, that inspired the subject and the appropriate setting for his group. And in fact, it is clearly a faithful figurative transposition of the text by Sestini. The sculptor stages the episode in line with the melodramatic style favoured then: the suspicious husband, gripped by jealousy, coldly receives his wife’s displays of affection, while already planning his revenge in his head: “But then the servant cleared the table / and then, left alone behind closed doors, / she wrapped her white arms around his neck, / as she was accustomed to doing; / then with a naive and tender look / he squeezed her, and hoped she would return the gesture, in vain; she took his hand in hers / as her hand was that of a dead body”.

The group sculpted by Fedi was so successful that the sculptor made a considerable number of replicas, often of a smaller size. One of these versions, now lost, had been placed in the garden of the Villa del Poggio Imperiale, while a splendid marble replica signed and dated 1872 is preserved in the Ashmolean Museum in Oxford. Many of these copies were purchased by the English tourists who visited the artist’s studio, as he was already well-known at the time, both in Europe and in the United States, as the author of the Rape of Polyxena. The style and the refined appearance of the robes, and the subject itself, were perfectly in line with the English taste for contemporary pre-Raphaelite painting.

The work kept in the Uffizi collections, currently located in the Green Room of the Royal Apartments in Palazzo Pitti, is one of the most ancient versions. When presented at the Universal Exposition of Florence in 1861, the king of Italy had honoured it by purchasing it for his own personal gallery.