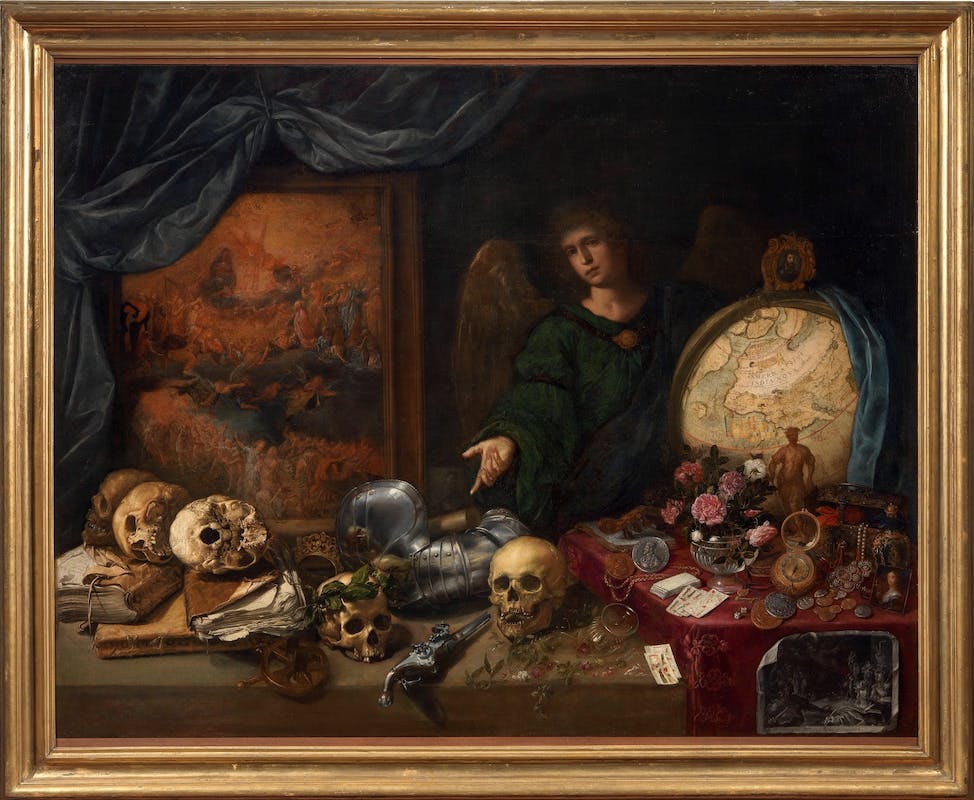 The term Vanitas derives from “vanus”, literally “empty” or “fleeting”, and in painting, it is used to refer to a representation that aims to make us reflect on the precarious nature of existence, on the inexorable passing of time, and the ephemeral nature of worldly goods. This still life by Antonio de Pereda, a Spanish painter and expert in this genre, presents all of the symbols alluding to the theme: skulls, fading flowers that are past their bloom, playing cards, luxury items and weaponry. The beautiful and contemplative figure of the angel, points to them, inviting to renounce them and to apply the right values in view of achieving salvation. Even the vast empire ruled by the great Charles V – whose portrait hangs above the model of the globe -  is destined to vanish in time, while the holy kingdom and its eternal justice will triumph definitively, as revealed in the large painting of the Last Judgement, unveiled by a drape in the background. In early 17th-century Madrid, Antonio de Pereda was one of the most successful still life painters, in a period in which this particular genre was becoming more and more popular. He trained at the studio of his father before moving from Valladolid to the Spanish capital, becoming a protégé of Giovan Battista Crescenzi, a Roman artist who was Superintendent of the Royal works in Spain. Through Crescenzi, de Pereda absorbed the style of post-Caravaggian naturalism, which combined a taste for simple compositions with great attention to detail with a tendency to accumulate symbolic items in which the significance is not always obvious.  De Pereda's artistic personality was not one of the best known in Italy, yet he deserves attention, not only because of the great quality of his works, but also because he was in contact with both Italian and Spanish pictorial culture, bridging the gap between these two different artistic and cultural worlds. This splendid Vanitas in the Uffizi is dated to a later period in the artist’s career, when his paintings were enhanced with countless details, objects and figures, at a time close to that of The Knight's Dream, one of his best-known works (1670 ca, Real Academia de Bellas Artes de San Fernando).