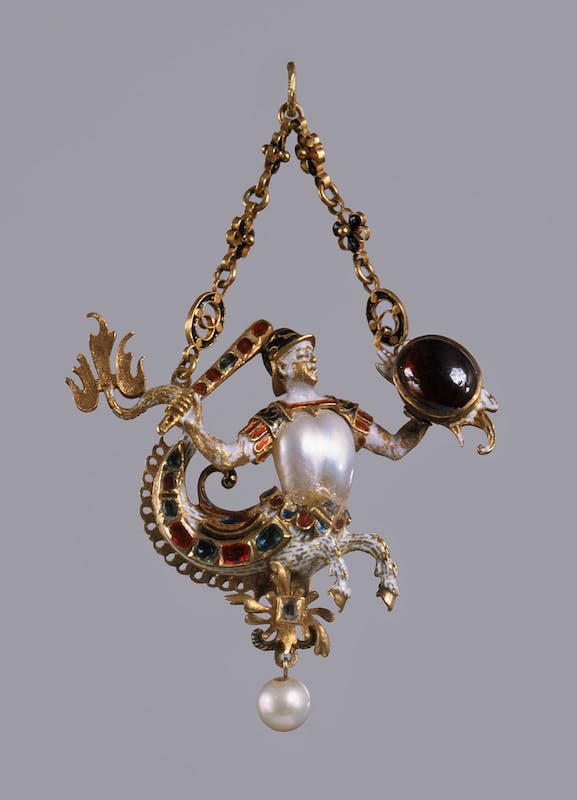 The triton is built around a large baroque pearl that, due to its strange shape has been used to create a breastplate, finished on the neck and shoulders with gold enameled in white, red, and blue. The marine figure, whose tail is dotted with rubies and emeralds, is represented in the act of fighting; on the left, he raises a shield, made from a large garnet cabochon, while on the right, he holds a club studded with four rubies and a small emerald; his head is protected by a helmet that is completely enameled. Behind his front legs, is an enameled scroll element with a square diamond and a round pearl pendant in the center. Two short chains are attached to the the tail and shield, with four small enameled openwork flowers, which come together in a ring at the top, which was used to hang the jewel to a gold chain or a piece of clothing.

This jewel, which has all of the characteristics of late 16th-century international Mannerist style, is commonly thought to be the work of a Flemish goldsmith.  A very similar piece is described among the jewels inherited by Ferdinand II de’ Medici on the death of his father, Cosimo II in 1621. “A Sea Monster with the body of Mother of Pearl and the rest in enameled gold with Rubies.” The richness and variety of the Medici precious jewel collections do not make it easy to identify this jewel as the one described, which is certainly one of the pieces from the Medici Treasury, jealously guarded by Anna Maria Luisa, daughter of Cosimo III and last member of the Medici family, until her death (1743).  This piece is one of the jewels taken to Vienna by the Lorraine family, who succeeded the Medici as rulers of Tuscany on the death of the last Medici Grand Duke, Gian Gastone (1737). It was recovered after the Second World War, following the peace agreements stipulated in the Treaty of Versailles (1919).