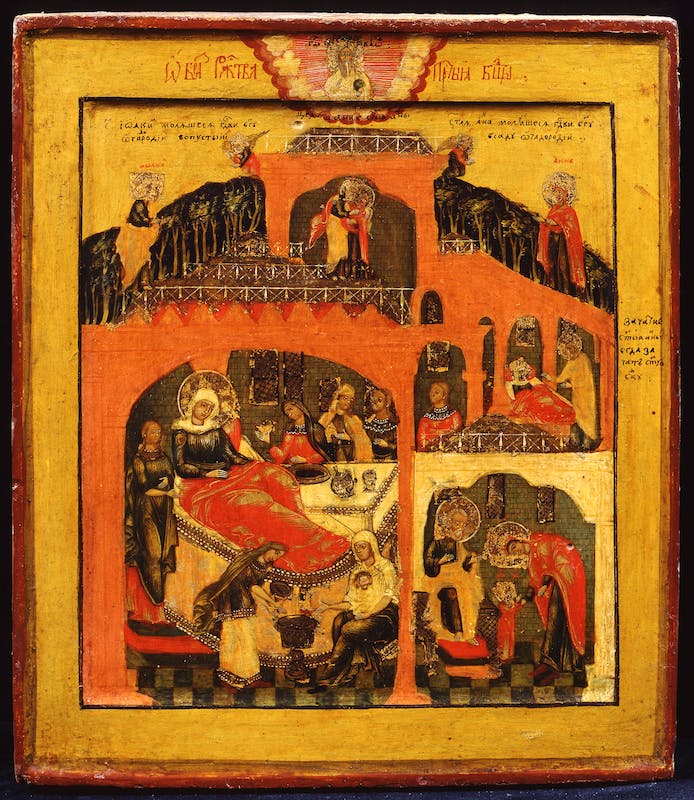 The icon illustrates the story of Mary's conception and birth in great detail. The various episodes are arranged around and within a complex rose architecture, starting at the top and closed off at the base with a wall made up of minute blocks of stone. The figure of God the Father dominates the composition, underlining the sacred character of the story and its demonstration of the divine will.

The upper register shows Joachim and Anne, elderly and childless, praying for a child. In the centre the couple are shown embracing and kissing, a customary representation of miraculous conception. This rare depiction of Mary's conception is also depicted more explicitly in the right hand scene where Anne is shown lying on the thalamus marriage bed with Joachim next to her.

The largest scene shows Mary being born and, in the forefront, in the arms of her midwife and about to be bathed. Anne, the new mother, is shown in bed being visited by several women bearing gifts. The story ends with a last scene, below right, illustrating Joachim and Anne's tenderness to Mary, showing the fond mother bending over her.

For use in home worship, the icon may have been made as a good omen for childbirth or on the occasion of the birth of a much desired child. The large number of the episodes illustrated, deriving from historic Byzantine area monumental cycles, was a feature of Russian icons from the 17th century onwards. Its complex structure, mirroring the complex nature of the story told, has affinities with the icons made by the Kremlin Armoury workshop in Moscow whose use of gold dust for the light effects on the garments was emulated by the artist who made this icon, in poorer and more simplified form.