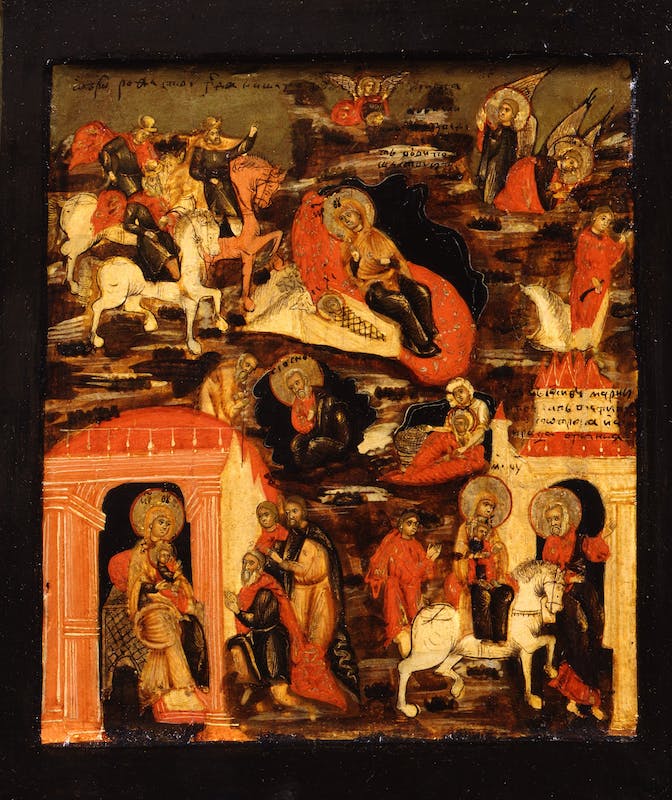 This nativity of Jesus is set in a grotto where Mary is shown lying down with Jesus in swaddling clothes alongside her and the ox and the donkey paying humble homage. Above the grotto, an angel is holding up the comet which guides the Magi on their way, depicted on horseback during their journey. To the right an angel announces the birth of Christ to a shepherd. At the centre of the icon, a woman is getting ready to wash the Christ child, an episode from the apocryphal gospel of James in which Joseph calls in a midwife to assist the new mother and new-born child.

The lower left hand side of the icon shows the adoration of the Magi with the three seers kneeling before the Virgin and Child sitting on the throne while the tale of the Holy Family's escape to Egypt to flee Herod's persecution is shown to the right.

The icon's subject was a frequent one in the Byzantine and Russian iconographical tradition where the theme of the birth of Christ is shown replete with figures and details and not infrequently inspired by the apocryphal gospels and supplemented with episodes from Christ's childhood. The oldest of these themes dates to the 12th century (the monastery of St Catherine on Mount Sinai) and reached its maximum dissemination in the 16th-17th centuries, an era in which new details were added, such as the angel holding the comet.

This nativity panel stands out from the Uffizi’s icons for its fine workmanship and, in particular, the delicacy of its flesh tones, meticulously defined features and detailed white imitation gold effect highlights. These same characteristics are visible in the Protection of the Mother of God icon (inv. 1890 no. 9363), which is probably the work of the same artist.