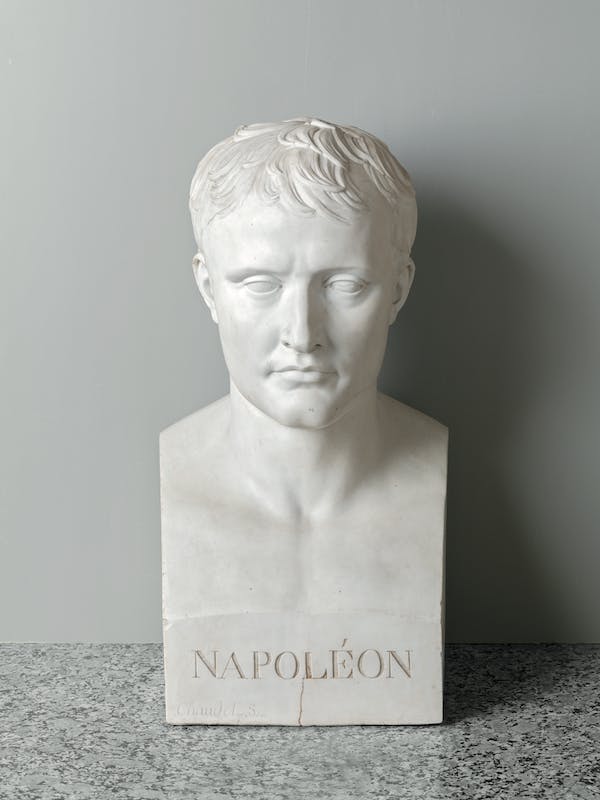 The archetype of the bust was the marble sculpted by Antoine-Denis Chaudet in 1799, to whom the Manufacture of Sèvres requested a larger version in plaster in 1804. This was to be used as a model with which to make versions in biscuit, which in 1807 were placed on the desks of the offices of the kingdom, or sent as diplomatic gifts. Before making this fine example, in 1798 the factory had already produced biscuit sculptures with the portrait of Napoleon conceived by Louis-Simon Boizot, pupil of sculptor Michel-Ange Slodtz and operational in the factory from 1773 to 1809.

Chaudet represented the emperor in the form of an ancient herma, signing the work underneath the inscription “Napoléon”, as is visible in both the marble version and the biscuit one. The dimensions of the biscuit version conserved in Palazzo Pitti mean that it can be considered as “of first magnitude”, since a smaller version also exists. This is not surprising as it was chosen by Napoleon as his official portrait in sculpture and in 1808 the biscuit versions were enriched with the addition of a bronze crown, or a marble or painted tin base. Finally, after 1811, they were embellished by the addition of drapery and a budriere. We learn from the factory documents hat this was an attempt to “form a pendant with the bust of Her Imperial Majesty, the Empress”.

Our bust bears the initials of modeller Alexandre Brachard and the date of execution, 18 June 1807, on the back. These details allow us to identify it as one of the two specimens “of first magnitude” mentioned in that year in the factory documents. The large dimensions and the technical difficulties experienced to execute the square porcelain base limited the quantity produced to just five pieces in the space of three years. In fact, the base of our bust shows clear signs of dry cracking, which would have occurred during the firing process. The date when it came to Palazzo Pitti is uncertain, but the Warehouse Inventory of 1814 contains an indication of its “arrival from Vusburg” [Würzburg Ed.]. We can therefore guess that it was effectively brought in 1814 by the Ferdinand III, Grand Duke of Tuscany upon his return from exile to Würzburg and that he had received it as a gift from Napoleon, even if no documentary proof of this exists. In fact, we know that in 1811, to mark the baptism of Napoleon’s son, his godson, the Grand Duke received two busts, one depicting Napoleon and the other his wife Marie Louise. These were sent by the emperor, but the one with his own effigy does not correspond to this one in the Uffizi.