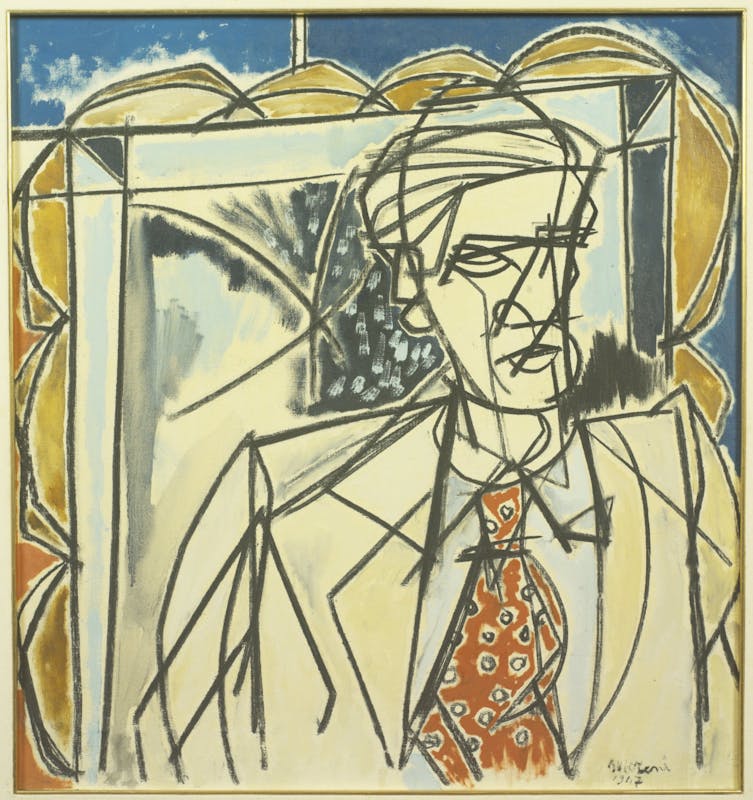 In 1947, 27-year-old Mattia Moreni took part in the renewal of Italian art, which was trying, after the devastation of the war, to find a new way by addressing the new European art movements. In this painting, the geometric definition of both the background and the figure shows Moreni’s interest for French Neo-Cubism, a hallmark, in those years, for the Fronte Nuovo delle Arti movement, which gathered diverse artists searching for a common European-oriented pictorial language. Also Moreni crossed his paths with that movement although from his personal point of view, often influenced by a wider range of many different stimuli. Indeed, also in that year 1947, the artist was in the organizational committee of “Arte Italiana d'Oggi - Premio Torino”, an exhibition that endorsed the combination between Neo-Cubism, Neo-Expressionism and “Concrete Art”. The Self-Portrait itself somehow displays the persistence of that expressionist influence that had marked the painter’s debut in the Thirties, and that is hinted at by the free use of colour, as is the case of the red polka-dot tie here suggesting his status as an artist with a bizarre and eccentric touch. However, at the dawn of the 1950s, such hints would be replaced by the abstract-concrete painting after Lionello Venturi, the leading critic of the Group of Eight where Moreni would be active since 1952.

The painting at issue entered the Uffizi in 2005 together with the acquisition of Raimondo Rezzonico's collection, which entirely consisted of self-portraits of twentieth-century artists. Against this background, the presence of Moreni is particularly meaningful, considering the importance, within his production, of the series of self-portraits all characterized by an informal sign, through which the artist’s self-representation becomes a means to investigate the mankind’s progressive development.