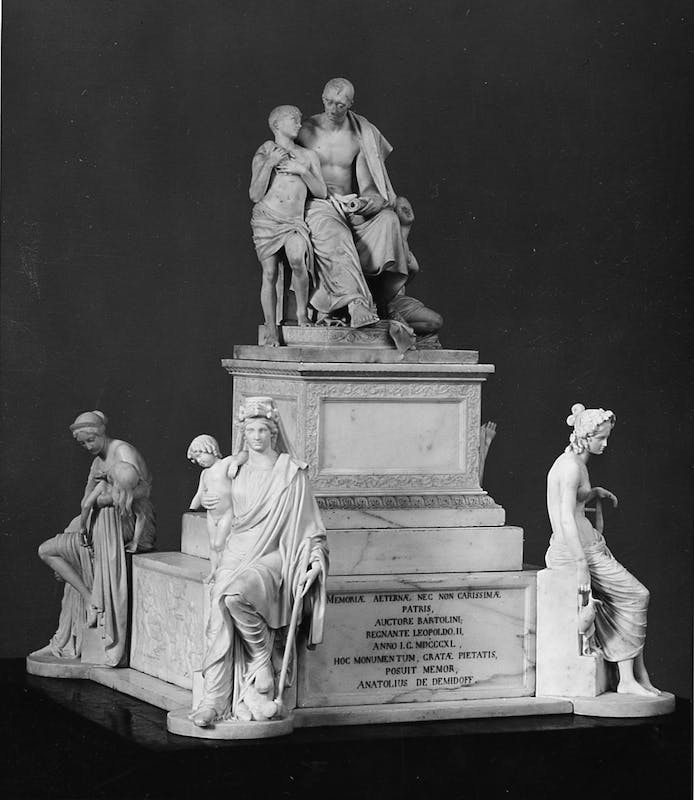 From 1830, Lorenzo Bartolini worked on the monument in memory of Russian prince and ambassador, Nikolai Demidoff, commissioned by his son Anatoly, a rich mining industrialist. The majestic work can still be seen today, in Piazza Demidoff, Florence, where it was placed in 1871.

The bozzetto, which is a third of the size of the statue itself, represents an initial idea to be submitted for approval before the creation of the work itself. At the top of the group of statues is the prince, embracing his son, both dressed in ancient garments. At their feet, is the kneeling figure of Gratitude, while at the four corners of the base, there are symbolic figures alluding to the prince’s life: Siberia, as a woman holding a miner’s hammer in her left hand while in her right, she holds Pluto, the child, a reminder of the wealth from the Siberian mines; Mercy, holding a dying child and covering a girl with her cloak, alluding to generosity of the Demidoff family towards the poor; Truth, who bares herself to art, symbol of the protection offered to the figurative arts; the Muses of Feasting, commemorating the numerous and wealthy banquets held by the prince.

The work was exhibited at the Paris salon in 1840 and then destined, first to the Villa di San Donato in Polverosa (now demolished) and then, in 1872, at the foot of a stairway on the Pratolino estate. It has been at Pitti Palace in the Gallery of Modern Art since 1970, when it was donated by Prince Paul of Yugoslavia, on the occasion of the sale of items from Villa di Pratolino, in 1969.