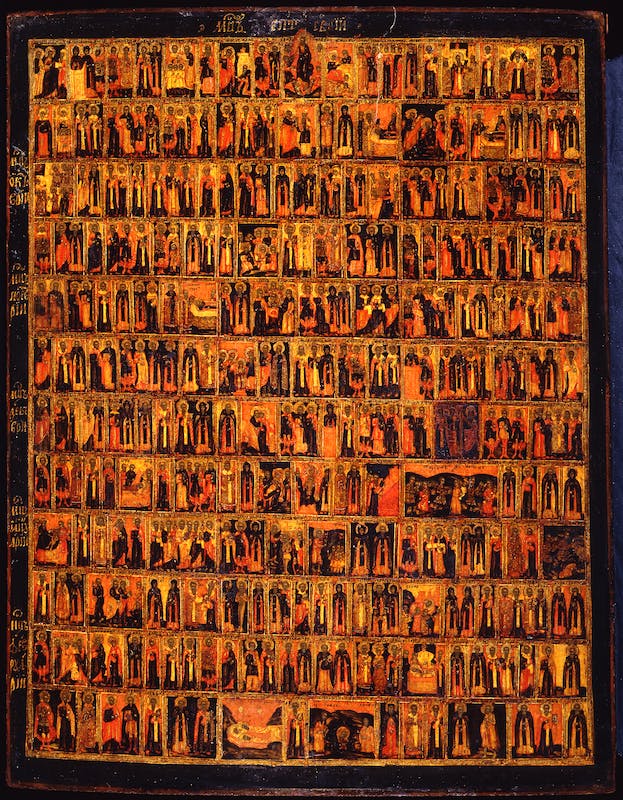 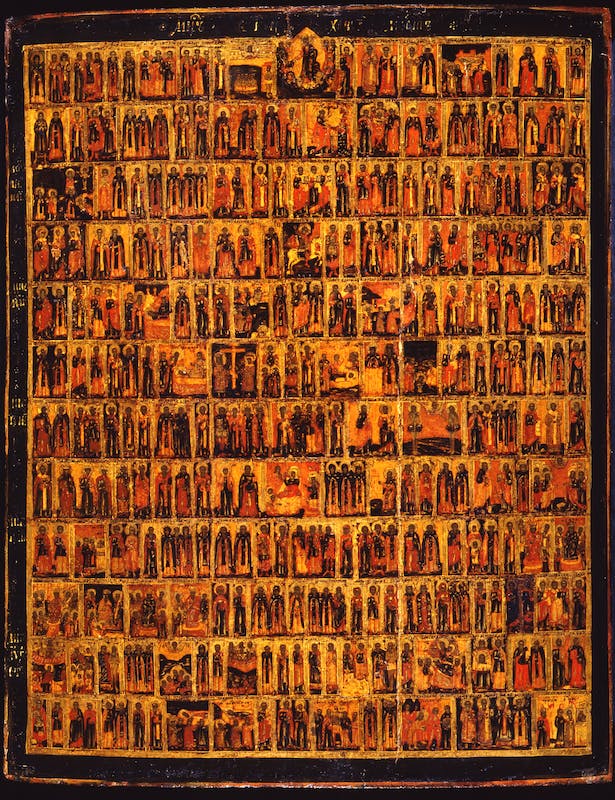 The icon, together with its pendant (inv. 1890 5955), is a Menologium, that is, a liturgical calendar of the Orthodox Church that collected the festivals of each day of the year. It includes both the fixed feast days and those commemorating the saints. The origin of these unique icons can be traced back to the illustrated Byzantine manuscripts that collected the lives of the saints and described the feast days according to the order of the calendar. The name comes from the Greek word mḗn (μήν), month.

The Menologium of the Uffizi Galleries is divided into two panels, corresponding to the two halves of the year. It follows the Byzantine liturgical calendar, which began on 1 September and ended on 31 August, even if the Julian calendar (1 January - 31 December) had been introduced into Russia in 1700. It may have been destined both for a church and for domestic use. It was made in a provincial workshop, in an unknown location, and was modelled on the annual series of the saints engraved in 1730 by Ivan Ljubetskij.

The first panel illustrates the feasts occurring from September to February. The inscriptions on the edge at the top, and on the left, bear the names of the months. Two horizontal rows are dedicated to each month, with the depictions of episodes of the Holy Scriptures, saints, and scenes of the translations of relics, all identified by inscriptions. The illustration of this part of the calendar begins on 1 September with Jesus’ sermon in the synagogue and ends on 29 February with the effigy of St John Cassian.

The second panel illustrates the feasts occurring from March to August; six inscriptions, bearing the names of the months, appear on the edge at the top, and on the left. Two horizontal rows are dedicated to each month, with the depictions of saints, episodes of the Holy Scriptures and scenes of the translations of relics, Each image is identified by an inscription. The illustration of this part of the calendar begins on 1 March with the effigy of Saint Eudokia and ends on 31 August with the feast of the Deposition of the Belt of the Mother of God in the Church of Theotokos Chalkoprateia in Constantinople. The chronological sequence is not respected for the scene of Christ’s Resurrection/Descent into hell, which is the most important Christian feast and is therefore reproduced in both the panels at the top, in the centre of the first row.

The Menologium came to Florence during the time of the Habsburg-Lorraine dynasty, prior to 1771.