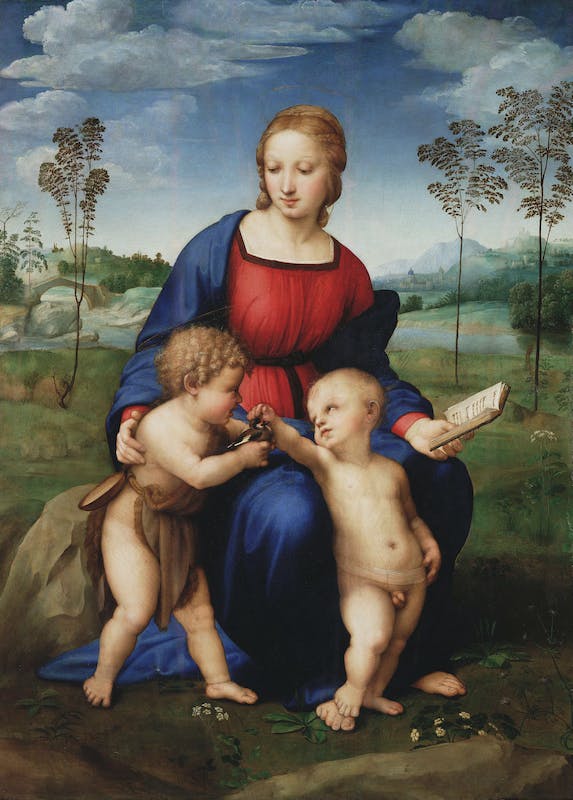 This work was painted during Raphael’s Florentine period (1504-1508), during which he was able to study the great masters of Florence and also to work for some of the more important merchant families. In his biography of the artist, Giorgio Vasari says that the painting was commissioned for the marriage of Lorenzo Nasi with Sandra di Matteo Canigiani, celebrated on 23 February 1506. When, the Nasi home was destroyed by a landslide in 1547, the painting was broken into seventeen fragments and probably given to Michele di Ridolfo del Ghirlandaio for restoration. Its subsequent history is unknown, until it is recorded as being part of the collection of Cardinal Giovan Carlo de’ Medici in 1646-47. During his Florentine period, Raphael painted other works on the theme of the group of the Virgin Mary with Jesus and the young John the Baptist, in which he was able to make use of all of his experience from Urbino and Florence (see, for example, the “Madonna in the Meadow” in the Kunsthistorisches Museum in Vienna, and the “Belle Jardinière” in the Musée du Louvre, Paris). The pyramid composition reflects the deep impression made on him by the lost cartoon for the “Virgin and Child with St Anne” by Leonardo, displayed from the beginning of the century in the Church of the Santissima Annunziata, as well as the “Madonna of Bruges” by Michelangelo, sculpted before summer 1506. By studying the laws of proportion in nature and in the works of Perugino, Fra’ Bartolomeo and Leonardo, Raphael was able to create images of an ideal, harmonious beauty that was not only perfect in its simplicity but also vital and dynamic, due to the intense exchanges of looks and gestures that link the figures as well as to the graceful variety of the expressions, made more natural by using Leonardo’s ‘sfumato’ technique, which Raphael also used to dissolve the background into the atmosphere on the horizon. This is such a modern image, yet it still contains symbolic elements from traditional worship, such as the small holy text in the Virgin’s hand – a sign of her faith and a foreshadowing of the sacrifice of Christ, which is also evoked by the innocently fragile goldfinch that the young St John is holding out so that the Christ Child may caress it.

The Madonna of the Goldfinch by Raphael

One of the greatest masterpieces in early 16th-century Florence

Uffizi for everyone - International Signs Video | Raphael, Madonna of the Goldfinch, 1506

This work was painted during Raphael’s Florentine period (1504-1508), during which he was able to study the great masters of Florence and also to w...