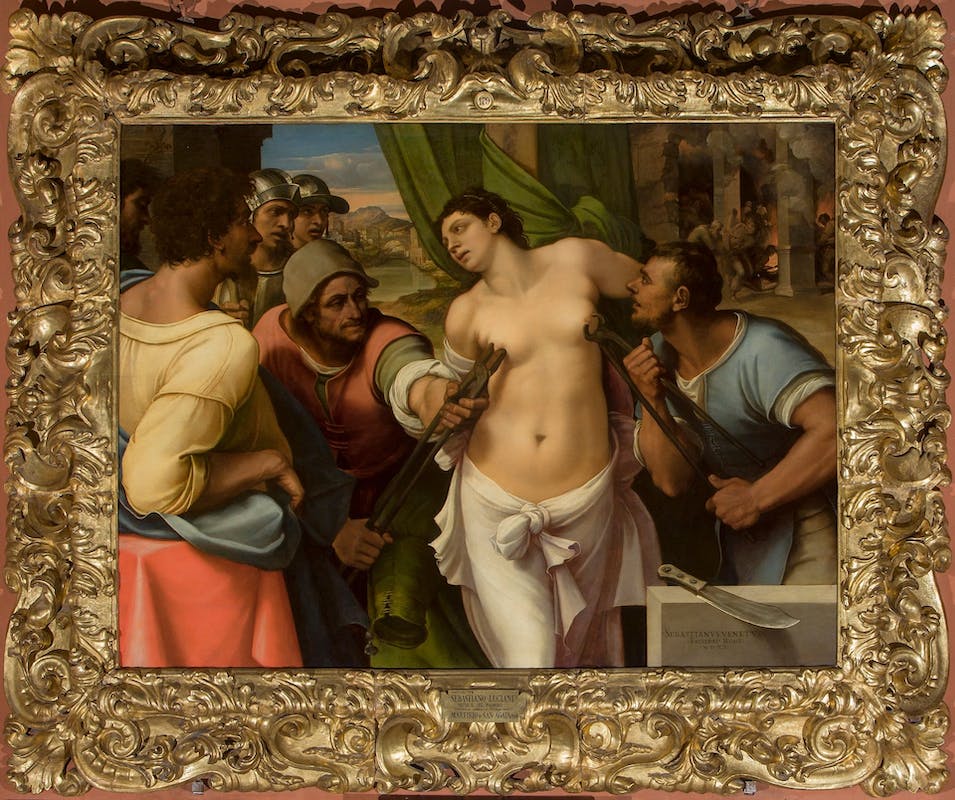 This is one of the most important examples of Venetian painting from the 16th century, signed and dated Sebastianus Venetus faciebat Rome 1520 on the parapet in the foreground, where the henchmen’s knife has been placed. In a letter dated 29 December 1519, and addressed to Michelangelo Buonarroti, Sebastiano talks about a newly finished painting for Cardinal Rangone. Critics have highlighted the fact that the work was commissioned by Ercole Rangone, appointed cardinal by Pope Leo X in 1517 and holder of the church of Sant’Agata in Rome. The painting’s particular shape (rectangular but developed across its width), suggests that it was for private worship, meaning that the cardinal did not intend to display it on the altar of his church but rather, to keep it for himself. The painting shows the martyrdom of Agatha, a Sicilian virgin, who was born and lived in Catania in the 3rd century A.D. According to tradition, the proconsul of Catania, Quintianus, who desired Agatha, accused her of blaspheming the state religion and ordered her capture.  In order to bend her to his will, he subjected her to an increasing amount of torture. The suffering that has most remained in popular memory, and the most widespread of the images, is when Agatha’s breasts were cut off with enormous pincers.  The painter has included a building in the background that’s in danger of falling into the flames, a reference to the earthquake that occurred during the saint’s martyrdom.

Giorgio Vasari saw the painting in the Guardaroba of Guidobaldo della Rovere in the Palace of Pesaro while on his travels in the Marches in 1566; he mentioned it two years later in a short informative piece in the Life of Sebastian del Piombo. The painting was brought to Florence in 1631 as part of Vittoria della Rovere’s dowry, last of the family and wife of Grand Duke of Tuscany, Ferdinando II de’ Medici.

From a style point of view, critics have highlighted how Sebastiano del Piombo chose a formal solution for this violent scene, characterized by the composition’s strong horizontal accent, as was frequently used by his fellow countrymen for subjects with a meditative or domestic tone, such as the Ages of man (for example in Giorgione's painting) or the numerous Madonnas and saints. There are also style elements of Venetian origin, such as the profil perdu of governor Quintianus on the far left, a technique previously used by Giorgione.