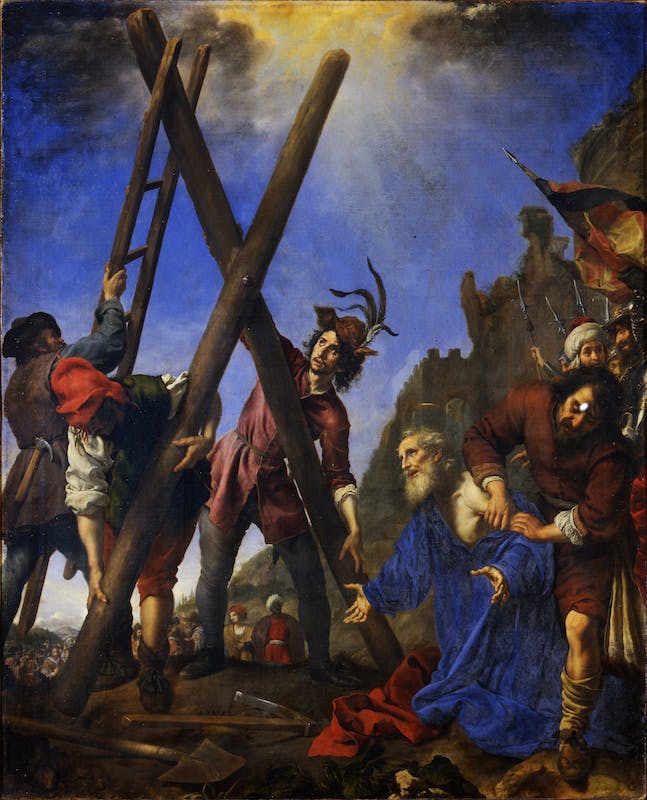 Carlo Dolci painted three versions of the martyrdom of St Andrew, who was crucified in Patras and, according to hagiography, was tied - and not nailed - to a cross, with his arms placed diagonally so as not to look like the sacrifice of Jesus in any way.

The scene, inspired by the Golden Legend by Jacopo da Varazze, illustrates the moment immediately before the crucifixion, when the saint is being stripped while his executioners set out the wooden poles to which he will be tied.. Dolci translates the excited, crowded action into stories of emotional truth, which we can read in the expressions of the saint, of his executioners, and of the remaining bystanders - many of whom are genuine portraits - as well in as the lenticular, thorough workmanship, with attention to such details as the carefully executed clothing of the protagonists and the textural quality of the trunk.  In the background, in the group bystanders watching the event, there are two outstanding figures, framed within the arc defined by the legs of the youth in a hat, shown in the foreground. One of these, wearing a red hat, faithfully copies the Portrait of a Man in a Red Cap by Titian, now in the Frick Collection, a painting evidently familiar to Dolci, although for reasons of which we are unaware.

An inscription in the bottom right states the date - 1646 - alongside the name of the artist. Three years before, Dolci had completed the first example in the series, signed and dated 1643, and now in the Birmingham Museum and Art Gallery. The popularity of this subject with collectors of the time is recorded by Filippo Baldinucci, Carlino’s biographer, who writes of the existence of at least three versions, one owned by merchant Paolo del Sera, which was taken to Venice, a second one in the collection of Marchese Gerini and another ordered by Carlo Corbinelli, which then passed to Andrea del Rosso.

To date, as well as the paintings in the Palatine collection and in Birmingham, there are other known versions and several copies, including one in San Casciano Val di Pesa, in the church of Sant’Andrea in Fabbrica.