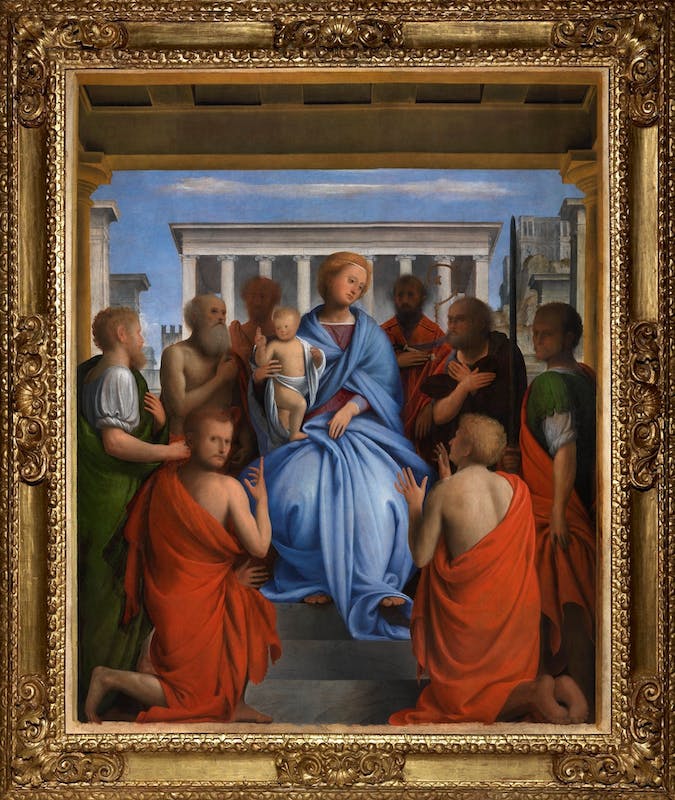 Madonna and Child with eight saints

The Madonna with Child, emerging from ample sky-blue drapes that are extremely full and airy, is the geometric focus of this altar piece. She is sitting upright on steps, under a loggia with Tuscan columns and a panelled ceiling, and is surrounded by eight male figures: those behind her and on her left remain in the shadow of the architectural structure, lit from behind by the brightness of the background, where an architectural backdrop of classical buildings from the Middle Ages and other periods is dominated by a sky as blue as Mary’s robe. The creative process of the panel, conceived within an unusual architectural structure, must have featured a continuing redefinition of its composition throughout the work itself. In fact, from close up, it is possible to see many pentimenti. The most plausible theory as to the hitherto unknown origins of the work is in fact a recent one. It may have arrived at the Trivulzio family, passing through various hands, from the church of the Santissima Annunciata convent in Lacchiarella (Milan), a Franciscan convent of friars from the Amadeiti congregation, known as San Martino. This ownership may help to identify the characters around the Virgin: the young bearded man in the white shirt and ample green tunic, who is looking at the Child may be the artist’s patron, perhaps Giovanni del Conte, member of a family with close ties to the convent, who made a bequest in 1513. The figure with the very long sword, on the right, instead of St Paul, as thought previously, could be St Martin of Tours, joined here by the poor man in the foreground, in the process of adoring the Madonna, his back facing the onlooker. To the left is a kneeling St John the Baptist, who faces the onlooker: a presence that may be a reference to the customer. Behind Mary, on the left is St Ambrose holding his scourge and crozier. In a previous version, the saint was painted with his bishop’s mitre, later eliminated. To the left of the Child is the white-bearded St Jerome, painted in the act of striking his bare chest with a stone, as a sign of penitence. There is also perhaps a St Joseph, with his hands folded over his chest. The altar piece is among one of the most successful by this painter, who developed his own very personal style after training in Milan with Urbino architect and painter, Donato Bramante. Style comparisons place the work among the later pieces by Bramantino, dating back to the first half the 1520s, coming as it does a few years after the Madonna and Child with Two Angels, now in Brera, painted by the artist shortly after his return from Rome in 1508.