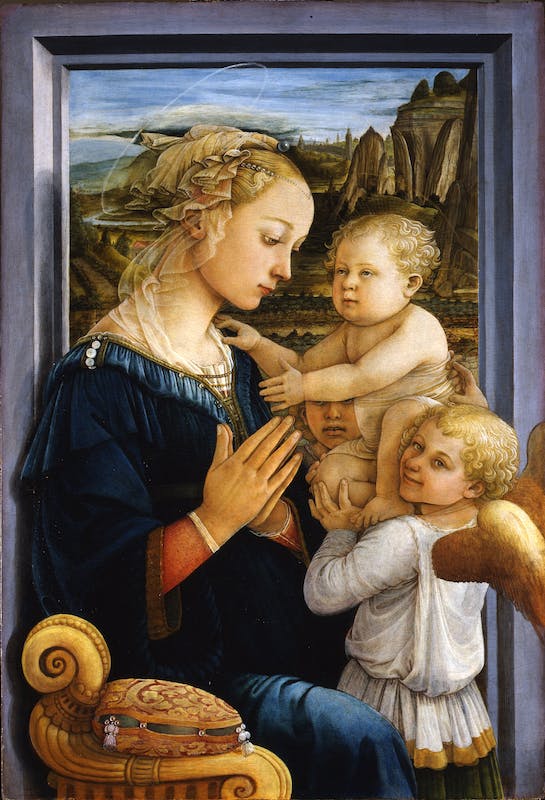 This is Filippo Lippi’s most famous piece and features an extraordinary spontaneity in its portrayal. The Virgin is seated on a throne, of which it is possible to glimpse only the soft, embroidered cushion and the carved arm. She is intently gazing at her son, turning towards him with hands clasped in prayer. Her expression is gentle and indulgent, almost melancholy, as if she can foresee the painful destiny that awaits her son. The young Jesus, covered only in swaddling, looks back at Mary, holding both arms out to her, supported by two angels. The angel in the foreground is smiling and looking outwards, as if to bring the onlooker into the scene. The close-up style, with the group painted as little more than half figures, placed in a small space and bordered by a Serena stone frame, make this composition similar to numerous relief sculptures made by the Florentine sculptors of the same period. The window opens out onto a vast, varied landscape, overlooking the sea, with rocks, vegetation, and buildings. The holy image has been translated with a deep sense of humanity, both through the expression of affections and in the choice of clothes and hairstyles, which have been inspired by the fashions of the same period. The Virgin is dressed most elegantly, with a crown of pearls and veils woven into her hair, in the same way as Florentine noblewomen from the late 15th century. The halos are barely hinted at: fine crowns and rays of light that do not cover the landscape behind. As yet there is nothing to confirm the idea that the Virgin’s face is none other than that of Lucrezia Buti, the young nun from Prato, who went on to become Lippi’s wife. The composition was a success from the start, and used as a model by many artists, including the young Botticelli, a pupil of the artist. We do not know, however, the original destination of this holy image; the first information dates back to the late 18th century, when it was in the Medici Villa of Poggio Imperiale in Florence.

Madonna and Child with Two Angels by Filippo Lippi

Video in Italian | Dated from around 1465, this work offers us a snapshot of domestic intimacy

The story of a beautiful nun from Prato portrayed and seduced by the Carmelite friar and painter Filippo Lippi.