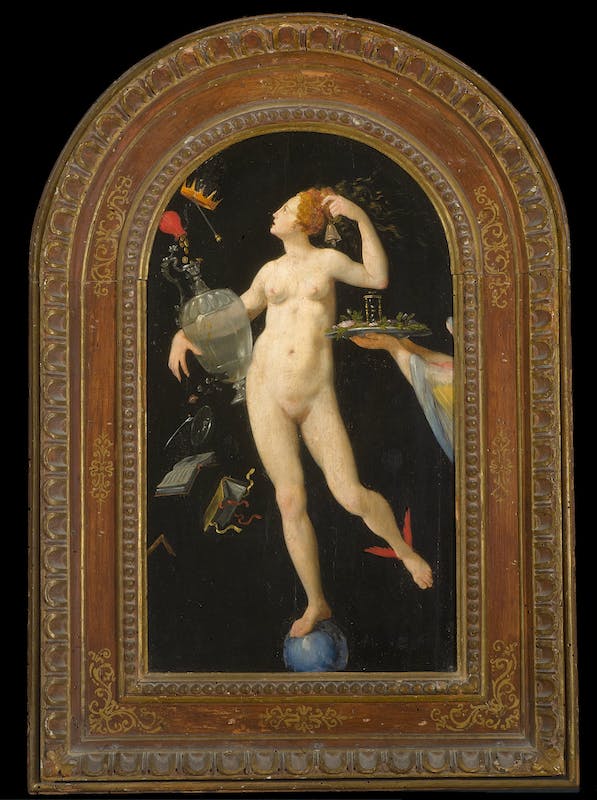 This small panel, originally the door of a piece of furniture, or the back of a mirror, depicts the goddess Fortune, accompanied by all her attributes. The goddess is portrayed balancing on a globe, a symbol of the instability by which she is characterised. The red wings on her left foot indicate her fleetingness. On her right, a crown with a sceptre, an inkwell, two books and a ruler fall from above, all symbols of earthly powers and trades that are subject to the goddess’s volubility. The coins sliding into the vase from a purse and coming out of its transformed into butterflies represent the transience of wealth. A winged figure, possibly a depiction of Time or Death, is offering Fortune a tray with an hourglass and some flowers, a reminder of the passing of time and the transitory nature of worldly goods.

The fragile glass vase that the goddess is holding on the right-hand side could be a tribute to the interest that Francesco I de' Medici, Grand Duke of Tuscany, paid to this kind of object. In fact, glass fusing, an activity Francesco practised as a hobby, was linked to the studies of alchemy, a branch of philosophy for which the Grand Duke harboured a passionate enthusiasm. Besides, Ligozzi, then a court painter, was one of the artists appointed to provide models for the most varied forms of glass windows, to be made in the foundries of the Medici. Of the many drawings of this type produced by the artist and preserved in the Department of Prints and Drawings of the Uffizi, there is one that, viewed close-up, resembles the vase painted in this work. This detail adds credibility to the attribution of the work to Ligozzi, a theory debated by critics in the past.

The detail of the butterflies, painted in a highly realistic way, reminds us that Ligozzi’s speciality was creating illustrations of plants and animals. Indeed, he produced many of these for both the Grand Duke and for the Bolognese academic and naturalist, Ulisse Aldrovandi. The artist’s refined technical prowess won him the favour of Francesco I: the Grand Duke appointed him to lead the pictorial decoration of the Tribune of the Uffizi, today partially lost, which consisted in an imaginative and multi-coloured composition of naturalia.

The Fortune by Jacopo Ligozzi

Video in Italian | A small painting at the Uffizi depicts a young girl off balance, the goddess Fortuna, with her foot resting on a sphere and a gl...