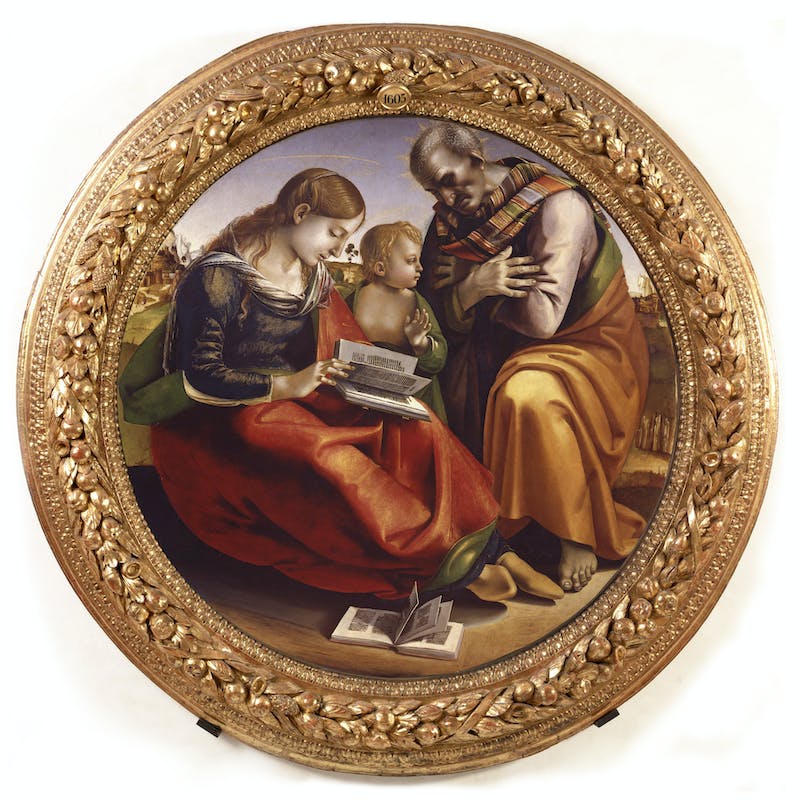 The tondo was a type of format generally utilized for scenes of sacred subjects, commissioned for private residences or city judicial authorities, such as in the case of this Holy Family. In presenting the works of Signorelli, Vasari testifies that the painting in question was made for the Sala delleUdienze of the Capitani di Parte Guelfa in Florence. Furthermore, this tondo is one of the first known works which depicts the Holy Family in a landscape, and it served as a model for a whole generation of artists, from Michelangelo and his Tondo Doni, to Raphael and Andrea del Sarto. In fact, the monumental rendering of the figures, placed in the foreground and almost invading the physical world, is certainly the most characteristic feature of the painting, a detail that differs from the works of his youth and seems to anticipate 16th-century techniques.

The Virgin, characterized by a pearly complexion and wide red tunic, is intent on reading a book, while Christ turns his gaze to St. Joseph. The three subjects in their monumentality occupy the whole painted space; on the background, we can see a barely defined desert or country landscape and some figures heading towards the fortifications.

As far as dating is concerned, scholars lean towards the second half of the 1480s, placing the work in a moment just before the realization of his paintings for Siena, where the painter arrived in the following decade.

The Holy Family represents one of the apexes of Signorelli's career, marking the achievement of his artistic maturity. In the hands of Saint Joseph and in the profile of the Child, in fact, we note cues deriving from Bartolomeo dellaGatta and Verrocchio, with whom the artist carried out his apprenticeship. Additionally, the tender face of Mary and the human gaze of Joseph reveal the innovations which characterize the fundamental stylistic production of the painter.

The Holy Family by Luca Signorelli

Video in Italian | Inside a perfect circle: the model for a whole generation of painters from Michelangelo to Andrea del Sarto and Raphael