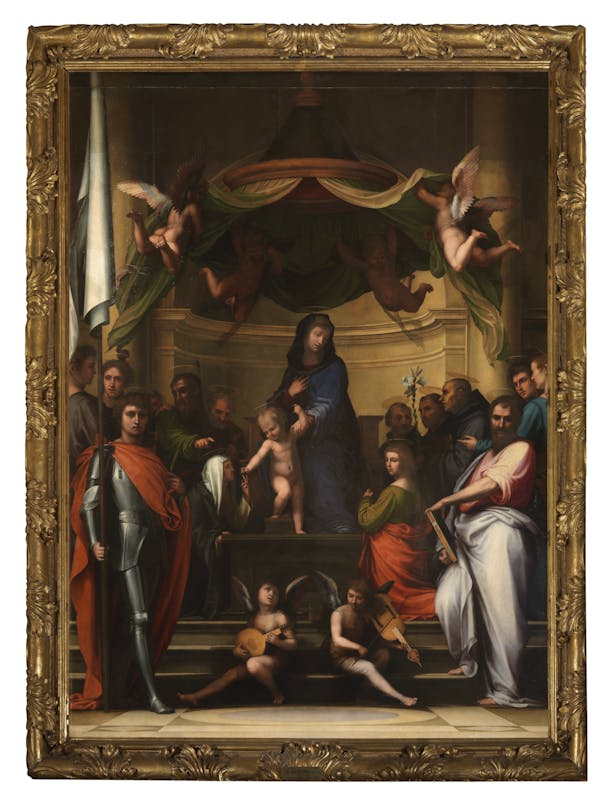 Painted in 1512 for the St Catherine altar in the Dominican church of San Marco in Florence, this altar panel's composition is an imposing one, featuring fifteen figures around the Virgin and Child with the latter having just got down from her arms to give a ring to St Catherine of Siena who is shown kneeling to the left. This mystic union is witnessed by the saints surrounding the scene in ordered symmetry: St Catherine of Alexandria, St Maurice, in armour, and St Bartholomew, with his characteristic knife. Behind them are the founders of the Dominican order and the main Christian martyrs, Peter, Paul and Stephen. Above them four angels are lifting the canopy curtains which are now topped by a pagoda type cover added in the late 16th century to adapt the altar panel to an new altar. Two angels playing musical instruments complete the scene's circular composition.

The panel was taken to Palazzo Pitti in 1690 at the behest of Gran Principe Ferdinando, who gave a copy of it to the San Marco Dominicans as payment, as was his custom, so that the church altar would not remain empty. The copy was the work of Anton Domenico Gabbiani, who also added to the original, enlarging the upper section with an ideal continuation of the architectural space. This operation was required to enable the altarpiece to be added to the Palazzo Pitti walls and incorporated into a monumental stick frame rimmed with great leaves there, the work of Giuseppe Magni, resembling that used for the two Andrea del Sarto Assumptions, Rosso’s Dei Altarpiece, Raphael's Madonna of the Baldacchino, Luca Giordano’s Virgin Mary, Orazio Riminaldi's Martyrdom of St Cecilia and others. Together with the Signoria Altarpiece begun a few years earlier and left unfinished (Florence, Museo di San Marco), the Pitti Altarpiece is the painting which best demonstrates the extent of Fra Bartolomeo's debt to Raphael, as a comparison with the Madonna of the Baldacchino (also on display at the Galleria Palatina in the Sala Saturno room) makes clear, with the latter being the inspiration for its scenic layout, saints’ poses and the intense visual dialogue between them. At the same time the central figures of the Virgin Mary and Child evoke the gentle, intimate and natural gestures which Raphael accorded his Florentine Virgin Mary and Childs and Holy Families. Painted in around 1512, this work is something of a compendium of the Dominican friar's artistic experiences, inspired as it was not only by the work of Raphael but also by Leonardo and Venetian paintings which he studied when he visited Venice in around 1508. The 1996 restoration restored the painting’s colour range previously subject to the progressive browning of the paint layers which had given it a monochrome, understated look. This influenced judgements of the painting in past centuries which were also conditioned by Giorgio Vasari's comments on it in his Lives in which he noted that ‘there is a great deal of emulation of Leonardo's style, especially in the dark colours where he used printing smoke and burnt ivory black’.