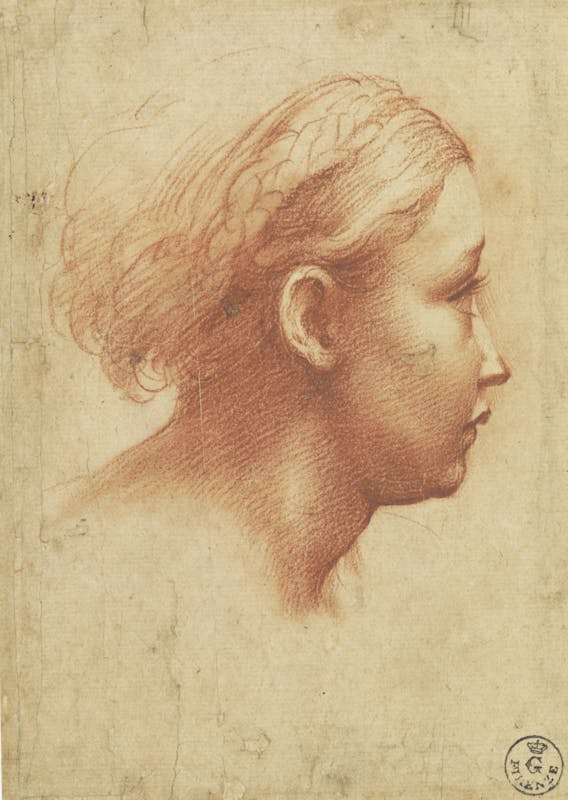 Originally thought to be a sketch by Raphael and, in the late nineteenth century, a work by his pupils, the drawing was only recently attributed to Parmigianino.

The girl’s head drawn on paper does not correspond with certainty to any pictorial project and rather appears to be an interpretation of an ideal image inspired by Raphael's female models and, in particular, the canons of beauty expressed in their faces. Indeed, from the early days of his career, Mazzola established a complex dialogue with Raphael, who the young artist considered a master to imitate, emulate and surpass and whose drawings, paintings and engravings after his works he studied extensively. While he would have encountered some of Raphael's masterpieces during his first stay in Parma (until 1524), it is likely that this particular image which so closely mirrors Raphael’s production was the result of a profound understanding of the artist's works, which could only have been gained during his time in Rome.

The soft blurred lines of red chalk are instead inspired by Correggio: in around 1520, in fact, Mazzola worked alongside his older colleague on the fresco for the church of San Giovanni Evangelista in Parma, where he would have studied his drawings mainly executed by using this technique.

Raphael’s female models, already well-known for their virtuous and graceful characters, would have almost certainly inspired Parmigianino to carry on his own interpretation which would later lead him to develop a new and original concept of beauty.

More info on the Euploos