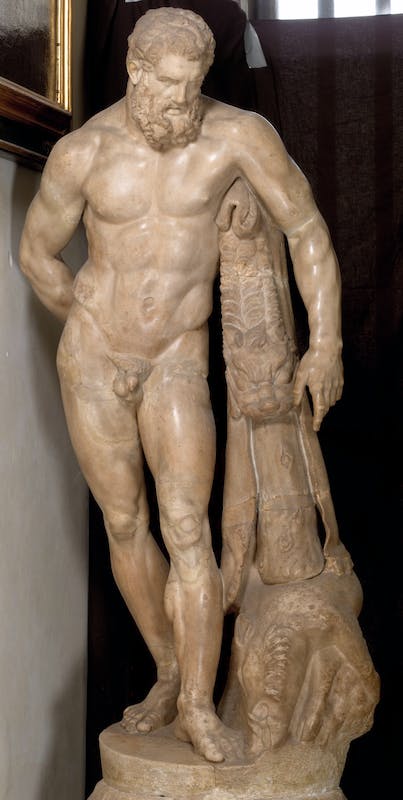 This statue depicts Hercules, resting for a moment from his famous twelve labours, resting on a club draped with a lion skin, while his right hand, behind his back, holds the apples he picked in the garden of the Hesperides, after holding the world on his shoulders, passed to him by Atlas. A hero, characterised by invincible courage and a completely human sensitivity of the kind rarely seen in a demigod, Hercules was one of the best-loved, most copied mythological figures. Many famous men in fact aspired to be compared with the one who was able to defeat some of mythology’s most fearsome monsters, from the terrible Hydra to the ferocious Nemean Lion. In particular, in the period between the 15th and 18th centuries, fantasy connected to his astounding feats became the subject of study and research. Hercules was a symbol of extraordinary power and meticulous cunning and from ancient times to the present, he has been depicted in different artistic versions: sculptures, paintings, reliefs, and frescos. The Florentine reproduction of Hercules dates back to the middle of the 2nd century A.D. and was probably copied from a bronze original from late 4th century B.C., attributed to Lysippus of Sicyon, one of the most important sculptors of the late-classical period. It was added to the inventory for the first time in 1668, a period in which it was part of the Hall of Geographical Maps or Wardrobe, while in 1825, it was to be found in the first corridor of the Uffizi.  In 2015, as part of the exhibition, “The City of Hercules. Mythology and politics” organized at the Poste Reali in the Uffizi, the figure of Hercules was celebrated, above all for the strong symbolic bond of his depictions with the period of the Florentine Republic. It should be noted that this image is also to be found on the seal of Grand Duke Cosimo I de’ Medici.