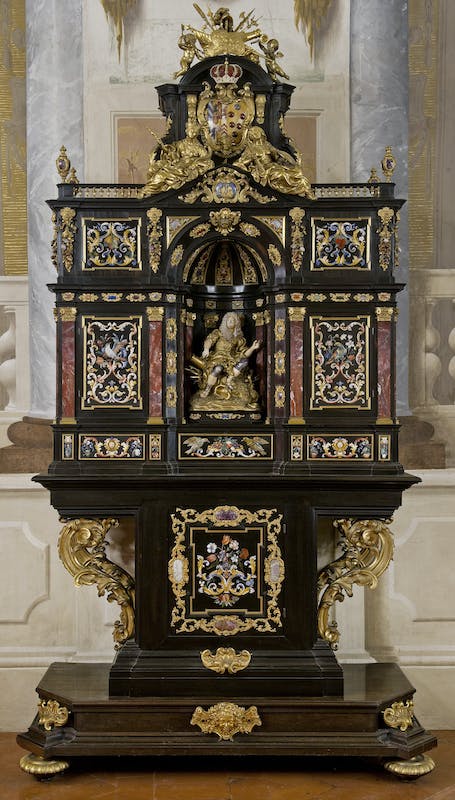 The cabinet is one of the most important pieces made by the Galleria dei Lavori, master craftsmen specialising in working with semiprecious stones, founded by Ferdinando de’ Medici in 1588 and located in the so-called “short arm” of the Uffizi, and which was given its name of Opificio delle Pietre Dure (Workshop of semiprecious stones) under the Lorraine dynasty. The cabinet was commissioned by Cosimo III de’ Medici and made from designs by Giovann Battista Foggini. The ebony wood cabinet is developed in height and width, as occurs in the majority of these creations. It stands out for the unity of the architectural design aiming to enhance the presence of the figure in the central niche, as well as by numerous bronzes, also made by Foggini.

The accent is of course on the portrait of the Elector Palatine, carved in chalcedon, dressed in gilded bronze armour and seated on the military trophies that symbolise martial virtues, in a coiled pose that brings dynamism to the whole structure. Above, he is praised by the allegories of Magnanimity and Strength, located to the sides of the Medici emblem quartered with that of the German prince, while at the top, a triumph of arms with heraldic symbols and the motto Dominus virtutum nobiscum (The Lord of the armies is with us), held by putti that return into two symmetrically placed rounds on the sides, hidden by doors, covered with mirrors and accessorised by small but genuine crystal chandeliers.

Together with the prie-dieu of the Electress Palatine (Inv. OdA 1911, no. 836) and the stoup decorated with the Annunciation (Inv. OdA 1911, no. 837) the cabinet was part of a collection of masterpieces in semiprecious stones sent to Düsseldorf in 1707 as a gift from Cosimo III to his daughter, Anna Maria Luisa, who had gone there as bride to Johann Wilhelm of Neuburg, Elector Palatine. Like the other pieces, this too made its return to Pitti Palace in 1717, when the widowed Electress Palatine, came back to Florence.

During the Lorraine period, the cabinet was damaged by attempts to remove some of the relief-cut panels in semiprecious stones, which were then replaced by mosaics.