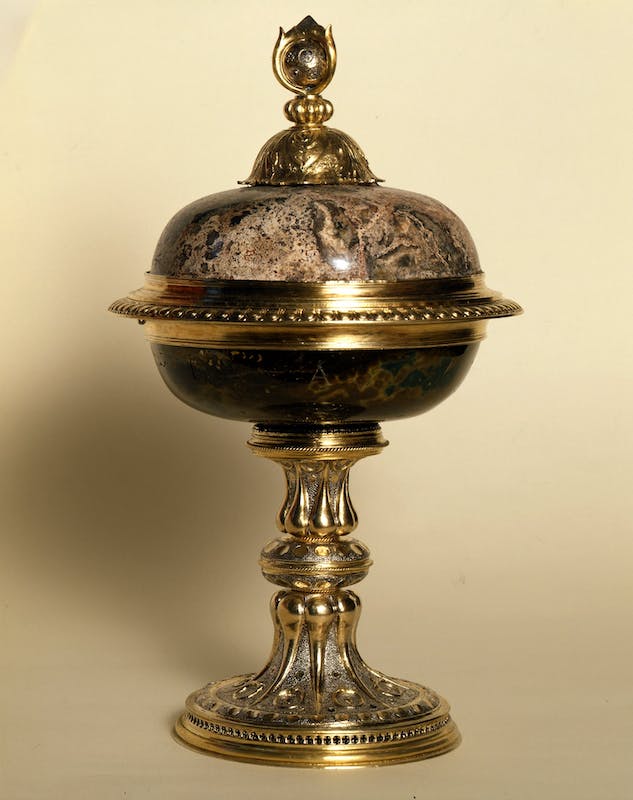 The body of the vessel consists of two jasper cups: the lower one is of very high quality, made in shiny dark green and brown jasper with golden highlights; the upper one has white, grey and red veining. The work has a circular foot with an elegant pod-shaped design that divides the surface into nine segments adorned by the heraldry of the Medici ball and the emblem of the ring with the diamond tip; similar flat patterns are also reproduced on the stem and the node. A silver band with a pod-decorated frame conceals the cup rims. The top, also in silver, has the emblem of the diamond tipped ring that encloses a sphere decorated by the balls of the Medici coat of arms, originally in red and blue enamel.

The story of the vessel’s jasper parts is complex, in the past they were considered to be ancient, but they are now attributed, together with the mount, to a 15th-century Florentine workshop. In particular, the parts in silver were definitely realized after 1465 in that the blue ball with three gold cornflowers is reproduced a number of times on the sphere, a heraldic figure that was added to the Medici coat of arms in the same year, granted by King Louis XI of France to Piero de’ Medici and his heirs and successors.

The splendid Double cup is not among the specimens in jasper described in a summary way in the 15th-century Medici inventories. Nevertheless, the presence of the inscription “·LAV·R·MED·” on the lower cup confirms that the work was part of Lorenzo the Magnificent’s collection, preserved in the family palace until the expulsion of the Medici from Florence in 1494, when many of the Laurentian treasures were dispersed. As with other Medici vessels in semiprecious stone, this too was brought back to Florence by Pope Clement VII (Giulio de’ Medici, the natural son of Giuliano), who transformed it into a reliquary casket and donated it to the Basilica of San Lorenzo in 1532. It was kept in the Tribune of Relics, constructed by Michelangelo, in the Florentine church until 1785, when Grand Duke of Tuscany, Peter Leopold had it transferred to the Cabinet of Gems in the Uffizi Gallery.