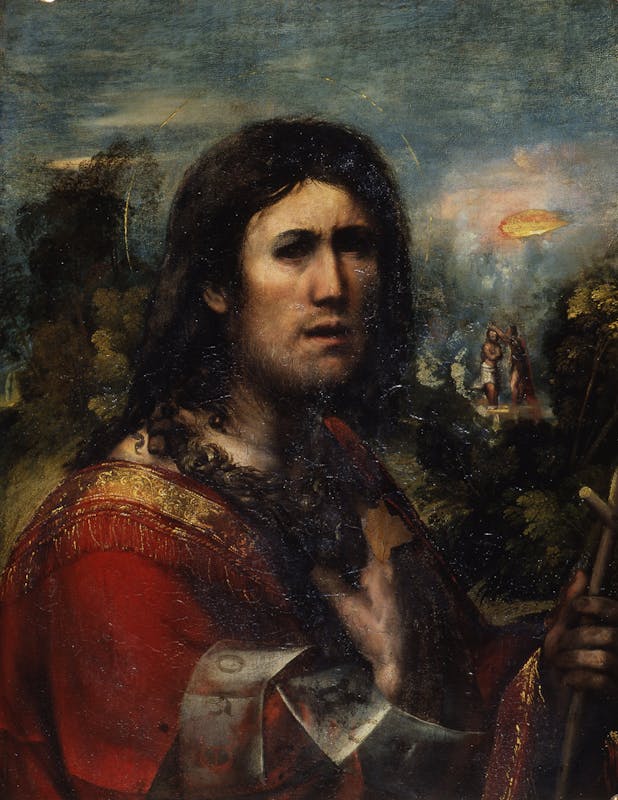 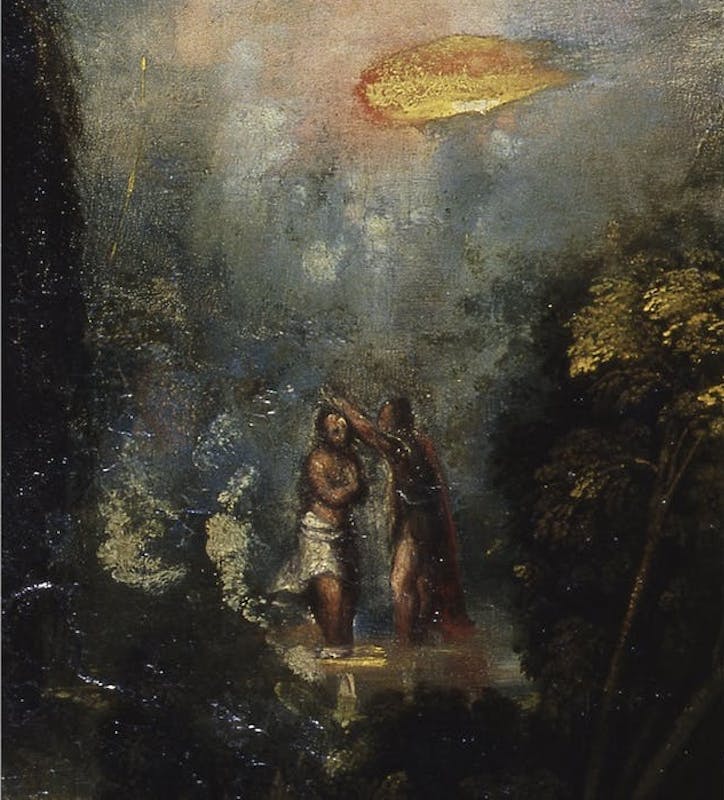 Depicted in a half-bust, three-quarter view, John the Baptist occupies the foreground, beguiling the spectator with his intense expression. His long, untidy hair, troubled look, and parted lips – as if he is about to speak – depict an icon of faith who ignited religious devotion and encouraged spiritual reflection and repentance.

The painting’s severe, tormented aspect evokes a period of intense loneliness spent in the desert, a circumstance symbolically represented by the camel hair outfit underneath John’s red tunic, and a crucifix composed of two simple reeds. The saint’s unkempt appearance juxtaposes his striking red robe – the colour of martyrdom – which is embellished with a decorative trim, golden damask embroidery and fringes. It is worn proudly by the Baptist, as if it were a cape. John holds a cartouche in his hand with a worn inscription that reads EGO (SUM) VOX (CLAMANTIS IN DESERTO), ‘I am the voice crying in the desert.’ This is the proclamation with which John alludes to himself as the forerunner of the Messiah in the gospels. It is also the verse that explains the scene depicted in the background on the right, where an intense light ignites the sky and appears to come from a comet or meteor. Said light is a physical representation of the descent of the Holy Spirit when John baptises Jesus. It is therefore a manifestation of the divine presence that will accompany the lives of both men and a witness to the passing of the baton, thereby anticipating the sacrifice of both John, beheaded at the hands of Herod, and Jesus, condemned to die on the cross.

This painting was commissioned by Ercole II d'Este, as is evidenced by the inscription M. HERCULUS D. CA. on the back. Dosso’s personal style usually found expression in impressive paintings, consisting of feathery brushstrokes, with which he painted the misty undergrowth, pools of water, and sudden flashes of cosmological light in this artwork.