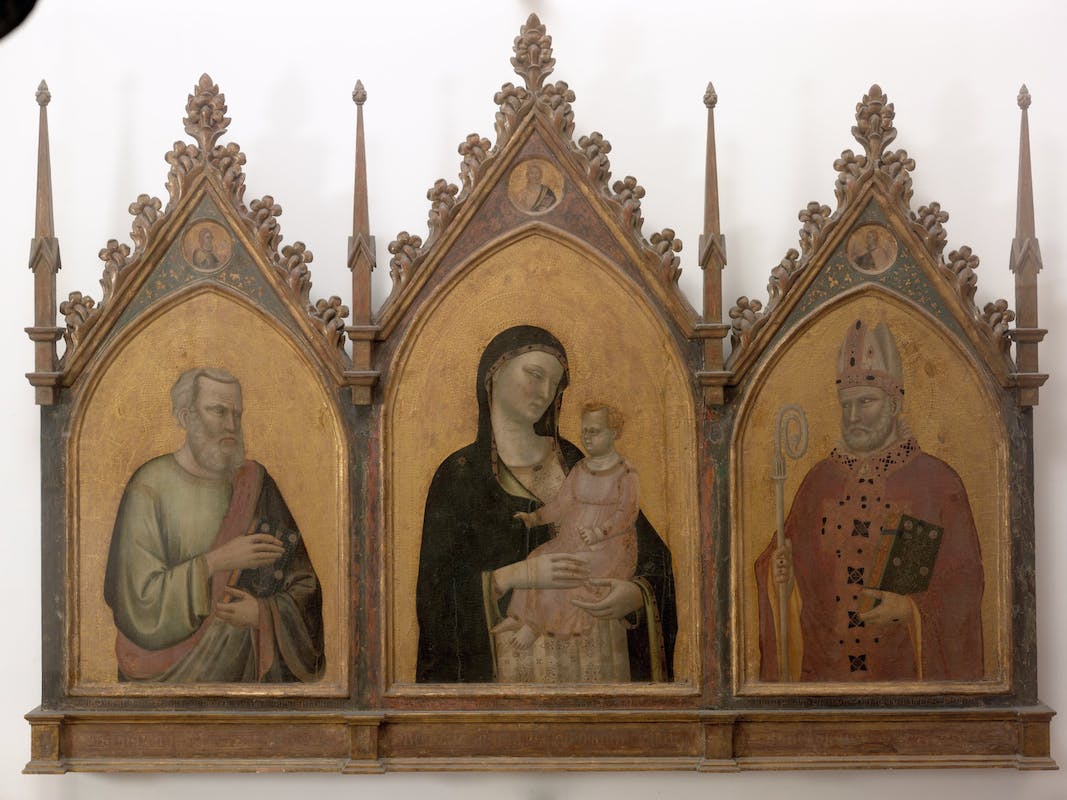 The triptych portrays the Virgin in half figure in the centre, holding the Child in her arms, with St Nicholas of Bari on the right and St Matthew the Evangelist on the left. Christ the Redeemer blessing appears in the spaces within the cusps, inside small tondos, flanked by angels. The lower predella of the frame features an original inscription, bearing the commissioner’s name, the date and the painter’s signature. The “Bernardus de Florentia” mentioned is the painter Bernardo Daddi. Very little was known about him and he was also often confused with his peers Taddeo Gaddi and Nardo di Cione, so he was only identified as the author of this triptych at the end of the 19th century.

This is the first work dated by the painter (1328, as read in the inscription), who is thought to have died during the plague in 1348. The date is followed by the commissioner’s name “Fr. Nicholaus de Mazinghis”, which explains the decision to portray the eponymous St Nicholas alongside the Madonna, in line with a custom that had been in use since the Medieval and would continue to be upheld in subsequent ages.

The layout of the triptych, in which the figures with their clear, bold outlines look like cut-outs set against the gold background, is inspired by Giotto’s Badia Polyptych, also preserved in the Uffizi. The Madonna is wearing her characteristic blue robe over a white gown, decorated with golden cross and star-shaped patterns. The Divine Infant in her arms is grabbing on to a flap of her dress, as babies often do. St Nicholas can be recognised by his bishop’s mitre, the richly decorated planet and the pastoral he is clutching in his right hand. In his left hand, he is holding a closed liturgical book, with an exquisite historiated cover. The Gospel that St Matthew the Evangelist holds close to his chest, indicating that he is the author, is just as finely decorated. The saint’s robe has been pulled down towards his elbow, revealing a tunic underneath in a beautiful iridescent shade of olive green.

Bernardo Daddi was the owner of a successful workshop in Florence, specialised in the production of small panel paintings and small portable altars for private use and for home environments. Here, and in his other paintings, he focuses mainly on the narrative and decorative elements of his work, considered more important by his private customers than how the volumes of the figures were depicted.

The triptych comes from the Ognissanti convent in Florence, where it remained until 1864. It was then found again in the Uffizi in 1871, definitively confiscated by the State following the anti-clerical campaigns ordered by the new Kingdom of Italy.