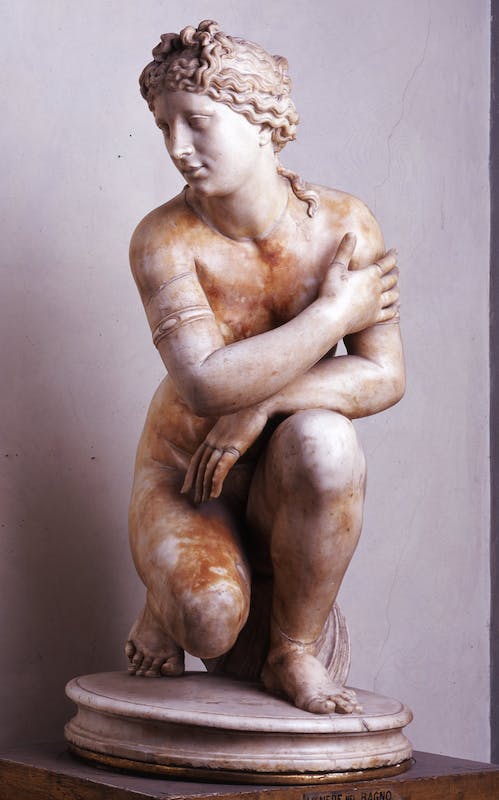 The statue represents an elegant Venus, crouching as she takes her bath, turned towards her observer and seeking to cover her breasts and pubis with her hand. Celebrated in antiquity and a model for artists of the Renaissance, this iconographic type has been copied many times and is identified as the Venus attributed by Pliny the Elder to sculptor Daedalsas. There are different variations and copies, but scholars agree that the archetype - the first example ever - could have been created around the middle of the 3rd century B.C., probably for Nicomedes I, King of Bithynia.

The Venus at the Uffizi has very delicate features, emphasising the gentle, relaxed shape of her stomach. In spite of her surprise at being caught naked, there is an almost studied elegance in her gesture of modesty, confirmed by her lively gaze, directed towards the observer. A jewelled bracelet adorns her left arm delicately, while her hair is gathered up in an articulated, elegant style, with curls that fall softly over her bare back. However, the current head is the result of restoration.

The sculpture was mentioned for the first time in the inventory of Villa Medici, the residence of the Medici family in Rome, in 1670, where it would remain until 1780/88, when it was moved to Florence together with other important art works, such as the Knife Grinder on display in the Tribuna of the Uffizi.