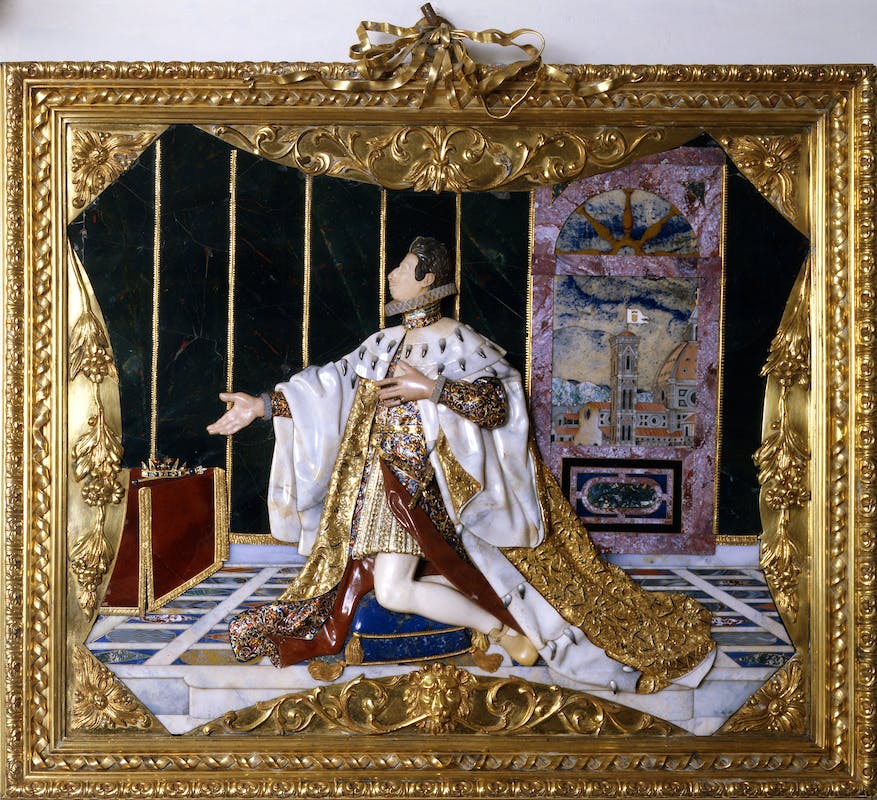 The relief was part of a sumptuous gilt antependium intended for the altar of St Charles Borromeo in Milan, to implore the saint, canonized in 1610, to cure the seriously ill Cosimo II. The grand duke is kneeling on a blue lapis lazuli and gold cushion, offering up the symbols of power: a diamond studded sceptre and crown, resting on an altar covered in a red gold-beaded cloth, simulated with jasper. The clothing is that of official ceremonies: an elaborately worked striped tunic, made of white enamel and gold, decorated with rows of diamonds and a long floral brocade cape, worked in polychrome enamel, tied at the waist by a belt with four small diamonds and lined in red (jasper again); he is carrying a sword with diamonds at his side. He is dressed in a gilt brocade cape with a large flower pattern, lined with white ermine made from light-coloured jasper and closed with a diamond clip. Behind him there is a window decorated with marble inlays made from semiprecious stone, opening onto a Florentine panorama, from which the dome of the cathedral and Giotto’s bell tower can be seen.

Cosimo died in 1621, three years before this extraordinary object, which had occupied the goldsmiths of the grand ducal workshops for seven years, was finished. Thus the antependium was never sent to Milan but remained in the grand ducal dressing room.

The goldsmith from Bologna, Cosimo Merlini il Vecchio, made a decisive contribution to the project, developed by the architect Giulio Parigi, in executing the framing halo and the relief in semiprecious stone, enriched with festoons, masks and seashells and, on the sides, by two cupids holding the grand-ducal crown and the Medici Habsburg crest, alluding to the marriage between Cosimo II and Maria Maddalena of Austria. Another goldsmith, the Swede Jonas Falck, produced the grand-ducal insignia, the diamond studded gown and presumably the cloak. The semiprecious stone parts, the pride of the Florentine workshops, were worked by the engravers Castrucci Michele and Gualtieri Cecchi.