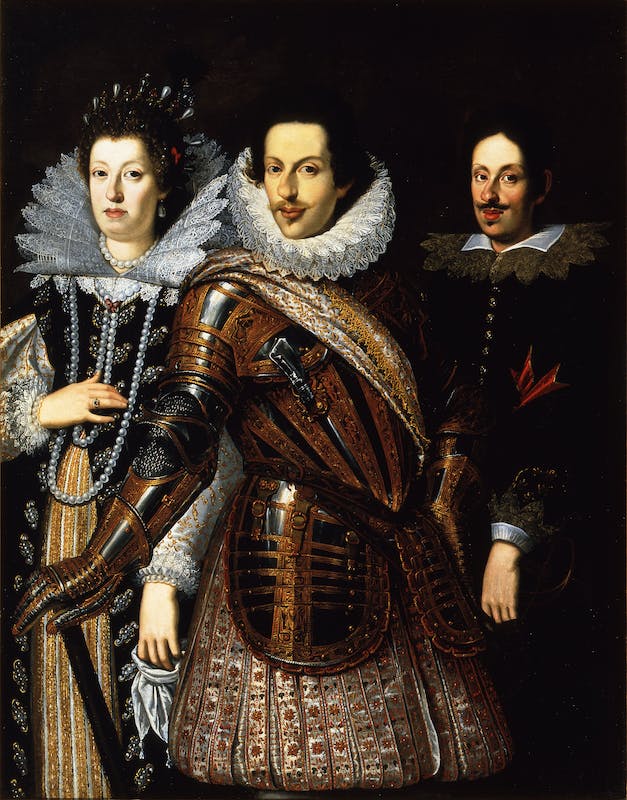 Recorded in Medici inventories since 1666, with the correct reference to Suttermans, this family portrait brings together Cosimo II, grand duke of Florence from 1609 to 1621, Maria Maddalena of Austria, and Ferdinando II, ruler from 1628 to 1670.

This loose composition of three figures, each of whom appears independent and without a real spatial and psychological relationship with the others, is due to the fact that the painting dates back to many years later, based on models already prepared by Suttermans and his workshop. The grand duchess is almost faithfully copied from the portrait with her son, Ferdinando (Inv. 1890 no. 2246), while the portrait of Cosimo comes from much older examples, such as the one from the courtly series (Inv. 1890 no. 2245, where it appears to be reversed and in official clothing), and it seems to be taken in particular from the oval in the Corsini collection, painted some time around 1620. As for Ferdinando, now an adult, while he was actually just eleven years old when his father died, the portrait is similar to other canvases from the early 1640s (Vienna, Kunsthistorisches Museum, Inv. no. 8003; and Sestri Levante, Galleria Rizzi - from the Guadagni collection).

The canvas seems to be a dynastic commemoration in honour of Cosimo II, a cultured, balanced ruler, with the allegory for Justice on his armour - perhaps in reference to the symbolic role of exemplum virtutis, which inspired both Maria Maddalena in her capacity as regent and Ferdinando, his legitimate successor.

The portrait also stands out for its extraordinary display of clothing and jewels, which are also extremely interesting in terms of costume history. The grand duchess is wearing a black dress with a petticoat in silver and gold, topped with a wide lace collar. Ferdinando wears a cloak with the cross of the Knights of St Stephen, an order created and supported by his great-grandfather, Cosimo I. The most interesting piece is the tiara in pearls and precious stones worn by Maria Maddalena, set with the Fiorentino, a 138-carat diamond purchased by Ferdinando I in 1601 and preserved among the Medici treasures until the end of the dynasty. It was taken to Vienna, where it remained in the imperial collection until the early 19th century, before disappearing into nothing, perhaps to make other gems or just sold and since then, nothing more is known about it.