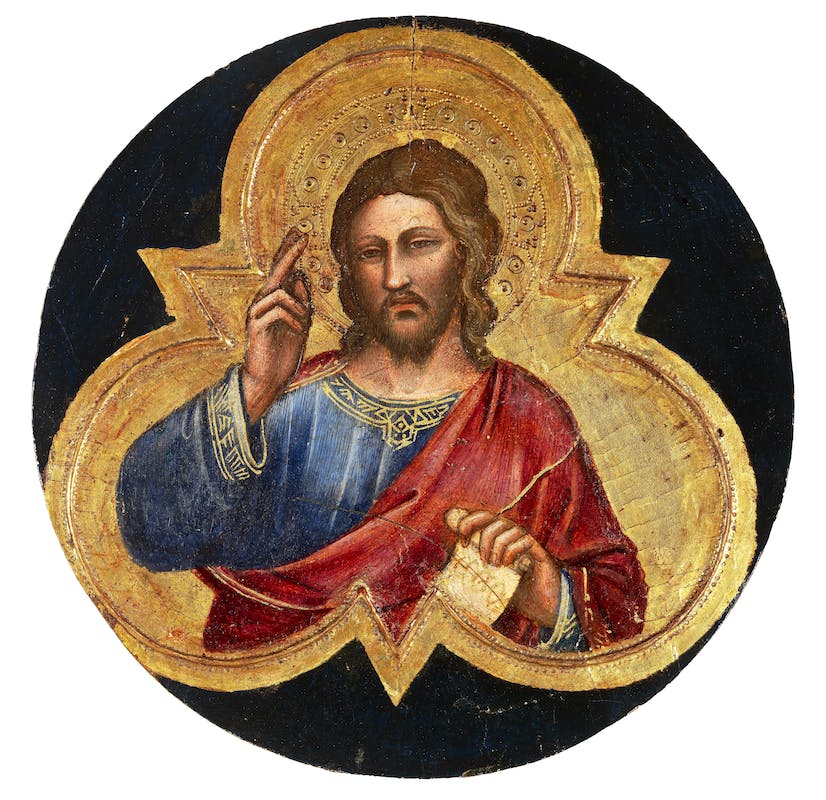 Christ blessing with his right hand, while his left is holding a phylactery inscribed with the Latin word, EGO. He is robed in red, over a blue tunic, the usual colours for Christological iconography which allude to the dual human and celestial nature of Christ, although often inverted - blue robe over a red tunic. The panel, whose original form is uncertain, since it has been altered and restored numerous times, was most likely inserted into the cymatium on an altar piece, perhaps as a polyptych with a complex frame, according to the sumptuous, magnificent style so characteristic of Tuscan painted panels in the late 14th century. The artist is Spinello Aretino, one of the most successful and popular artists between the 14th and 15th centuries, an extraordinary narrator who expressed himself in an original language, able to harmonize the tradition of Giotto with the naturalistic ideas of late-Gothic style. As well as working in his birthplace, he also worked in Lucca, Florence, Pisa and Siena, and expressed his style best in the techniques of fresco and painting on panel, sometimes collaborating with other artists to deal with more demanding commissions, with an authentic entrepreneurial spirit. The panel of Christ Blessing may belong to one of the polyptichs painted by Spinello in Lucca, during the early 1380s, perhaps on one of the two altar pieces commissioned by the Olivetan Benedictine monks from Florentine carpenter, Simone Cini, Senese gilder Gabriello Saracini, and painter, Spinello Aretino.

Presented at the Export Office of Florence, on 6 August 2012, it was bought by the Italian Government for the Uffizi Gallery with ministerial decree no. 24410 of 10 September 2012.