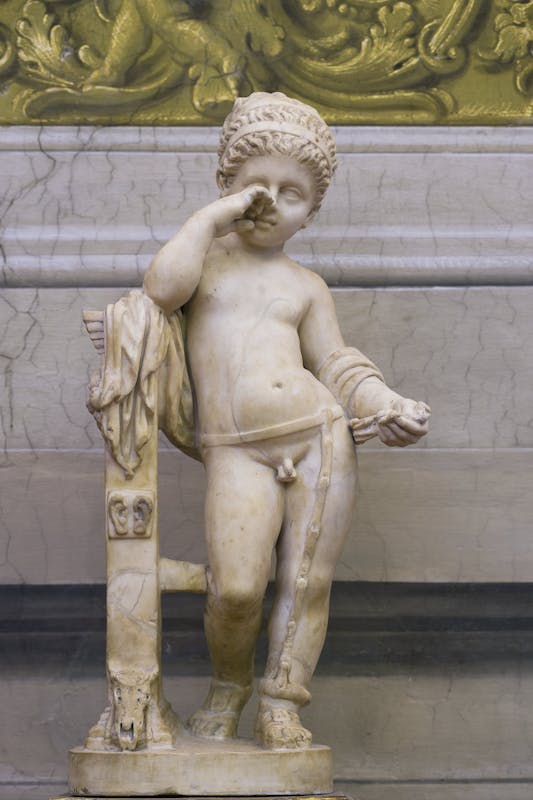 The work depicts a crying boy, chained at the waist and by one foot. The unusual image, brought to Florence from Villa Medici in Rome before 1625, has not failed to arouse the curiosity and antiquarian interest of scholars since the 18th century, when it was interpreted as a “weeping slave”. In actual fact, the figure is a complex allegory representing Cupid, in chains and without wings. The motivation for the singular punishment was suggested by comparisons with other sources, such as epigrams kept in the large collection known as the “Palatine Anthology”, where the little god is described as having his wings removed and being punished by the goddess, Nemesis, whose role as avenger for wrongs suffered does not even save Cupid, who is used to tormenting lovers: “Who bound your hands to the pillar in a fast knot?/ Who opposed fire with fire and guile with guile?/ My boy, no tears! Do not wet your sweet face!/ For you take delight in the tears of young men”, is an example from a charming composition by Antipater of Thessalonica. The marble is a copy of an original that is presumably from the late Hellenistic period (1st century B.C.).  A garland on the support pillar and the skull of an ox on the base are references to a sacred context, and would seem to suggest a link between the figure or better still, the original prototype - documented, as well as by this copy in Florence, by other examples from the imperial period - to the decoration of a gymnasium. In this sense the hairstyle of the putto, with curled hair in leather ties, is similar to that found in images of athletes. This detail is placed in the context of the work in quite a complex, evocative way, since athletic competitions were also placed under the protection of the goddess, Nemesis. Modern integration, at the nose, neck, stomach, hands and pubis have not distorted what would have been the original appearance of the work.

A sentimental journey among the ancient statues of the Uffizi Gallery

Worn by the Gods

The Art of shoemaking in the ancient world, the epic films and contemporary fashion