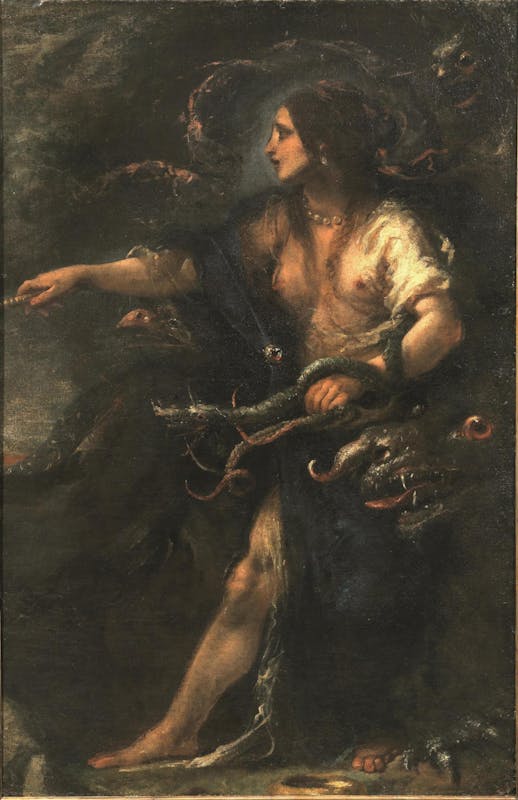 Presented to the public for the first time in 1986, on the occasion of a large exhibition on the 17th century in Florence, when it was attributed to Cecco Bravo, Armida has been named several times in specialist studies and joined the Florentine collections in 2017.

The protagonist is one of the most intense and moving figures in Jerusalem Delivered by Torquato Tasso: a beautiful Muslim princess, extremely gifted in the art of magic, is sent by her uncle to the Christian army, with the task of distracting the soldiers with her cunning and seduction. Falling hopelessly in love with the crusader, Rinaldo, Armida abducts him to take him to the Fortunate Isles, conjuring up a palace and enchanted gardens in order to keep him there. Carlo and Ubaldo, companions of Rinaldo, are able to enter the fairytale kingdom, where they find the young man and convince him to return to his army. The abandoned Armida falls into despair and fury. She climbs to the top of the mountain, calls to her all the spirits of hell and then leaves to join the Egyptian ranks in order to get revenge.  This is the image chosen for the painting by Cecco Bravo, where the bold sensuality of the young woman is accentuated by the transparencies of her clothing and by the pearls and ribbons she wears.  The regular profile of her face is like that of an antique cameo, emphasised by full lips, eyes looking off into the horizon, and the arm lifting the magical sceptre. An astonishing variety of animals surround her: dragons, serpents and demons from the circles of Hell as described by Tasso. Never truly frightening, but rather bizarre and subservient to the satirical, burlesque vein that flows through Florentine paintings from the mid-17th century, becoming a particular feature, these monsters seem inspired by the limitless range of inventions taken from ancient grotesques and the variations they offered to the whole Mannerist generation and beyond, through to the dazzling sorcery of Salvator Rosa.

The scene is not complete because the canvas has been cut down on the left side, so there is a piece missing that perhaps corresponds to a section of landscape that contained other fantastical apparitions. The painting therefore must have been wider than it is today.

It has been dated back to the 1650s, as suggested by scholars, and critics have agreed that from a style viewpoint, it is like that of Cecco from the same period. After his initial training at the workshops of Rosselli and Bilivert, Cecco was seeking his own original path, which included travel to study in the north, reflections on Venetian culture, and participation in the freer examples of painting by his contemporary, Francesco Furini. His research is hesitant in its effusive style, with paintings built around brush strokes in strident colour, in contrasting transparencies and more consistent uses of texture, with flashes of light and back light effects. In the period around the middle of the century, Montelatici definitively abandoned the vein of naturalism that characterised his works until the 1940s, making way for compositions in which space is less three dimensional, the main scene is pushed into the foreground and the backgrounds fade into distant, blurred landscapes, veiled in tones of grey.

Purchased by the Friends of the Uffizi Gallery in 2017

Armida by Cecco Bravo in the words of Torquato Tasso

Love, anger and despair of the beautiful princess painted at the Uffizi