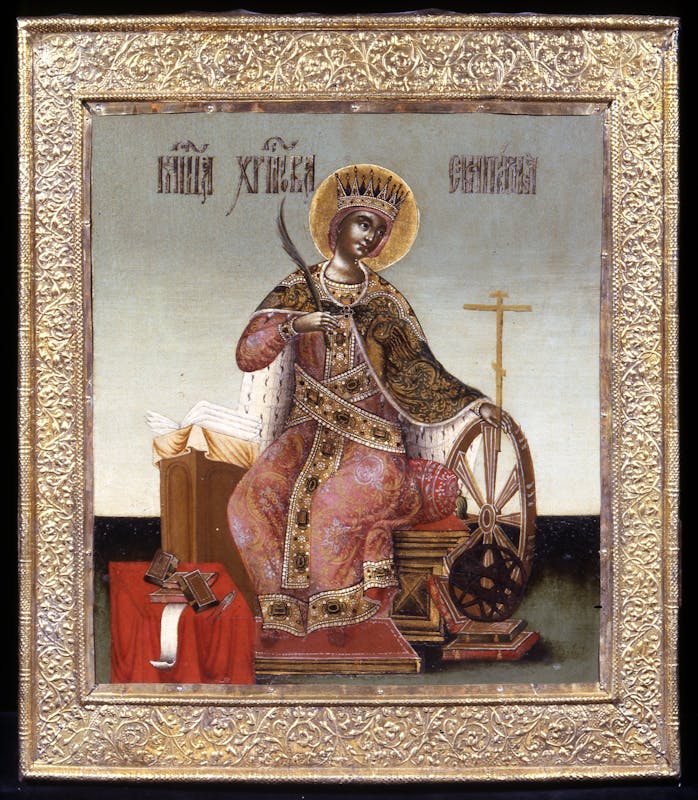 The holy martyred princess Saint Catherine of Alexandria is sitting on a backless throne dressed in regal attire: over her richly decorated tunic, she is wearing the loron, a vestment made of fine fabric, studded with precious stones that was a mark of the wearer’s high social status at the time of the Byzantine empire. Her attire is completed by a magnificent ermine-lined cloak decorated with the Byzantine imperial coat of arms, the two-headed eagle. The saint is holding a palm branch and a cross, which identify her as a Christian martyr, while the spiked wheel on which her left hand rests is a reminder of the torture she was subjected to. The saint is surrounded by many books, as well as a compass on the low table on the left, and an astrolabe on the right, which allude to her wisdom, used to win over and convert pagans.

The icon reproduces an iconographic model thought to have been generated in Crete at the beginning of the 17th century, in which elements of Byzantine origin are set alongside others characteristic of the western Christian tradition. One of the most important and ancient examples of this type is the icon painted in 1612 by Geremia Palladas for the iconostasis of Saint Catherine's Monastery on Mount Sinai, in Egypt. Smaller versions and prints of this style of icon promoted its popularity in Russia in the aristocratic circles of Muscovite society, and this appears to be where the icon in the Uffizi Gallery came from. It is one of the most refined examples of workmanship in the Florentine collection, created by a master of the workshops of the Kremlin Armoury.

Along the edges, the holy image is bordered by a coating in gilded silver (oklad) decorated by a pattern featuring floral volutes, in the edge of which it is stamped with the inscription CB (202), that is, the date 7202. The Byzantine calendar, used in Russia until 1700, began from the creation of the world, established as occurring 5509 years previous to the birth of Christ. The date 7202 therefore corresponds to the year 1693/1694 in our calendar (the Byzantine year began on 1 September and ended on 31 August), a date that is also an important reference for dating the painting of the icon.

The icon arrived in Florence before 1771.