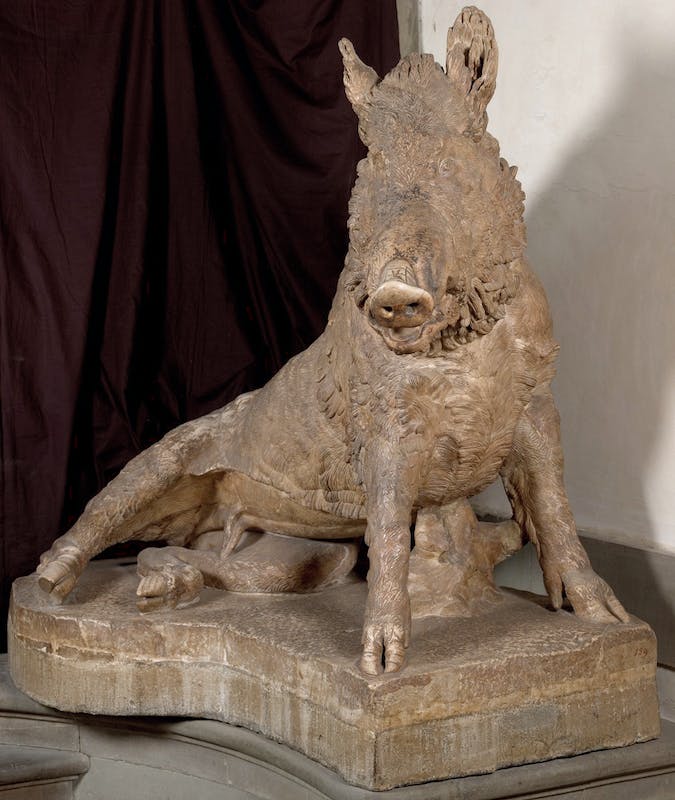 The Boar is one of the most popular sculptures in the Gallery and owes most of its fame to a more famous 17th-century copy in bronze (the so-called “Porcellino” or “Piglet”), realized for Cosimo II de' Medici by sculptor Pietro Tacca, and placed in the Loggia of the Mercato Nuovo.

The sculpture now housed in the Uffizi was found in Rome in 1556, on the slopes of the Esquiline hill, and, after an initial restoration, it was brought to Florence in 1568, together with two statues of Molossian Dogs, as a gift from Pope Pius IV to Duke Cosimo I de’ Medici, who initially had it placed at Pitti Palace. The extraordinary quality of the workmanship meant it was immediately defined as a “Greek boar”, even if it is more probably the work of an artist from the 2nd-1st century b.C., inspired by a Greek model in bronze from the Hellenistic period (300-200 b.C.), and most likely part of a group of statues with a hunting theme. With this sculpture, the artist shows that not only does he have a perfect familiarity with the appearance of a male adult boar (the long tusks from the restoration are now lost!), but that he is also perfectly aware of its natural behaviour. In fact, the animal is captured in a totally realistic pose; the boar has been woken by the approach of the hunter and frightened, sits up on its front legs, sniffing the air. Works such as this one reflect the birth of a new interest in the animal kingdom, which, with the first bestiaries from 200-100 b.C. would lead to the first treatises on ethology.