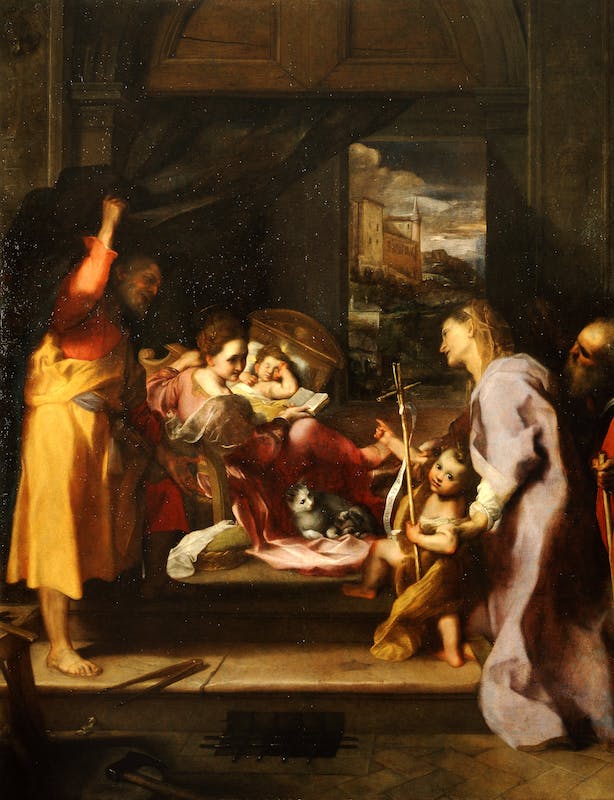 The scene is framed by a wooden door, to the left of which St Joseph is drawing back the curtains to let in St Elizabeth with the young John, followed by the elderly Zachary, who can be glimpsed to the right. Mary is cradling Jesus and reading a prayer book and turns happily towards her relative who has come to pay homage to her. Joseph's work tools and a sewing basket, in the foreground, are tangible signs of the modest but dignified lifestyle of Christ's parents and contribute to creating a homely, everyday atmosphere made even more tender by the cat, nestled between the folds of Mary's clothing almost as if it had been woken up by the arrival of the guests, a detail which inspired the painting's traditional name. The large window in the background opens onto a spectacular view of Urbino, with the unmistakeable cuspidate towers of its Ducal Palace so dear to the painter. This is where the painting came from, having, in all likelihood, been commissioned by Francesco Maria II della Rovere and connected to Pope Clement VIII’s visit to the Marche in 1598, if the documentary evidence is to be believed. The Madonna of the Cat must have been positioned in a chapel laid out for the arrival of the pope in Urbino, but there are also other hypotheses which link the commission to the birth of the duke's first-born, Federico Ubaldo, in around 1605. Despite the damage done to it in early 18th century restoration work, the painting conserves all the beauty of Barocci’s work, who inspired early 16th century masters ranging from Raphael to Correggio, with an entirely original painting style made up of soft colour transitions and delicately contrasting colours. Much praised by contemporaries, the Madonna of the Cat arrived in Florence in 1631 as part of the large dowry brought by Vittoria della Rovere to her husband Ferdinando II. It is likely that it was the grand duchess herself who commissioned it to be made into a tapestry by French Pietro Fevère, head of the Manifattura Medicea workshop, in 1663-64 (now kept at Palazzo Pitti, Appartamenti Reali, Inv. MPP 1911/13637)