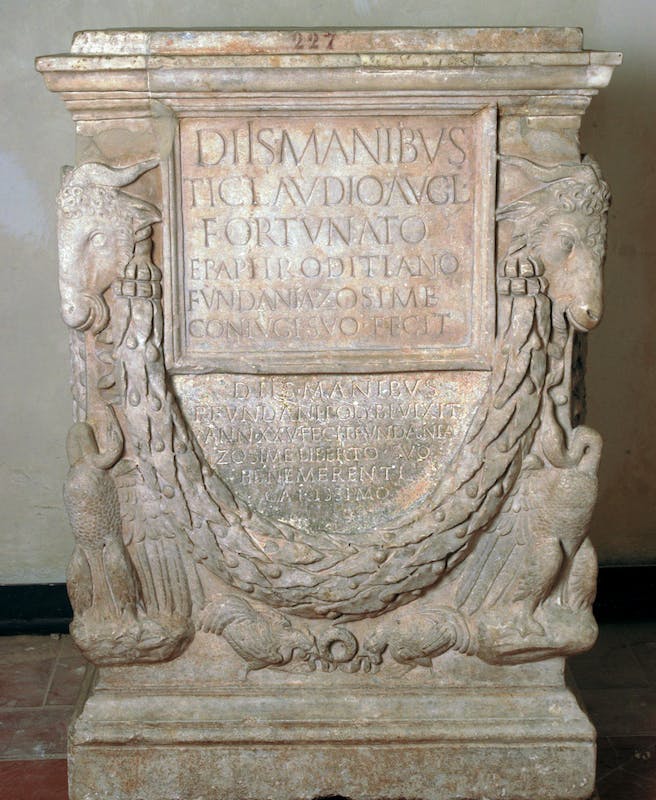 The funerary monument, commissioned by Fundania Zosime, is richly decorated on three sides with festoons of laurel leaves and berries that divide the space in half. One end of the space is attached to the horns of the rams occupying the upper corners of the main face of the altar, set opposite two eagles on projecting bases at the bottom. The noteworthy naturalism of the eagles’ plumage is of the same kind as that which characterises the two cocks fighting under the festoon. The upper part, inside the table, hosts the dedication with the original destination of the monument, followed shortly afterwards by a second dedication, engraved in the space between the table and the festoon(CIL VI 15082).

As shown by the inscription in the table, the altar was first dedicated to Fundania's husband, Tiberius Claudius Fortunatus Epaphroditianus, freedman of an Augustus who, given his family name, could only have been Claudius or Nero. The more likely of the two is Nero, due to the cognomen Epaphroditianus which appears to allude to Epaphroditus, Nero's powerful freedman. In fact, he may have given Fundania's husband to the prince before he was freed. However, no information about this event is provided by the sepulchral dedication, which is very basic, while the second inscription, dedicated by the woman to her dearest freedman, the 'meritorious and dearly beloved' Publio Fundanio Polibio, is richer in praise. However, the sequence of the dedications does not imply a succession of the two characters in Fundania's life, possibly offering further proof that the woman in fact chose one of her freedmen as her companion, but the most interesting fact that emerges from the monument is the central role that Fundania - probably a former slave herself, given her cognomen of Greek origin- had decided to carve out for herself. In fact, although the eulogy is not dedicated to her, she not only uses it to show that she has gained a position of freedom and prestige by the side of an imperial freedman, but also that she has succeeded in becoming the patroness of a servant familia, to which she appears to be able to tend even after the death of her husband.

The only definite information on the origin of the monument places it in the 18th century in the Niccolini collection in Florence, from which it passed to the Uffizi Gallery in 1824, but its decoration clearly indicates that it was made in Roman workshops.