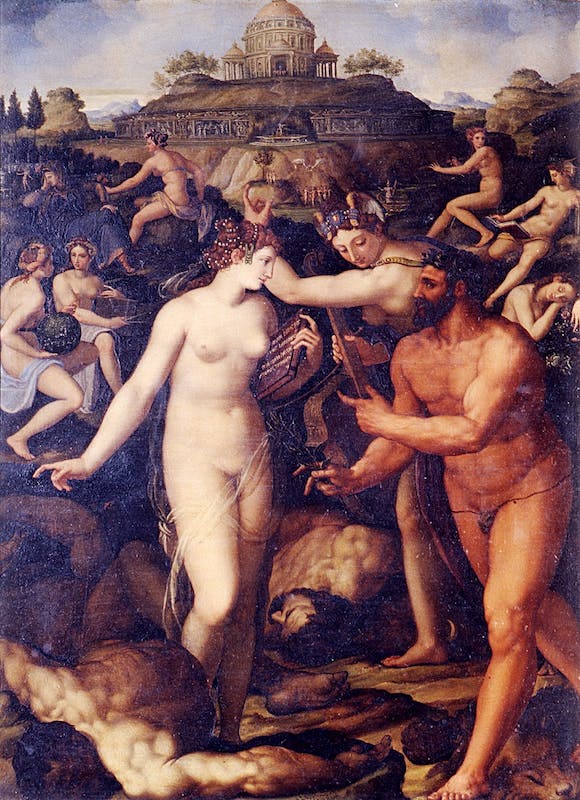 This small oil on copper painting is part of a series created by Vasari and the artists in his circle for Francesco I de' Medici, Grand Duke of Tuscany, featuring subjects based on the writings of Don Vincenzo Borghini, prior of the Ospedale degli Innocenti. Finding inspiration in episodes taken from classical mythology and Ovid’s Metamorphoses, Borghini had developed a series of “inventions” laced with complicated allegorical meanings designed to celebrate the Florentine “talents” and the great Medici governance. Francesco I, who had an introverted and contemplative temperament, was particularly fond of this genre of painting destined for private use: in fact, only a few very cultured people were capable of understanding its symbolic, often obscure meanings. Here, it is important to remember that Borghini would also go on to devise the complicated iconographic plan of the studiolo that the prince commissioned in Palazzo Vecchio a few years later, to which Allori also contributed, with the paintings Pearl fishing and Banquet of Cleopatra.

This small work depicts Hercules crowned by the nine Muses, a tribute to him for having rescued them from the Giants, who are lying on the ground, defeated. Beside the hero, the figure of Calliope, the patron of epic poetry, stands out. She is holding a tablet bearing an inscription that invites Hercules to reap the praise and accolades for his feats. The background features a temple dedicated to Honour and Fame.

The painting therefore aims to reference the condition of peace achieved by Florence thanks to the great Medici governance, under which the arts were protected and allowed them to flourish.

From a stylistic point of view, the work is undoubtedly tinged by the influence of Bronzino, Allori’s teacher, upon whose death Allori would inherit his workshop and his role as official artist of the Medici court.

Allori’s gratitude to his teacher is particularly evident in the pale, smooth complexion of the muse Calliope, and in her refined curly hairstyle, interlaced with strings of pearls. But the sculptural anatomy of the nude male figures reveals the painter’s familiarity with Michelangelo's frescoes, which he would have been able to study during his stay in Rome in 1554.