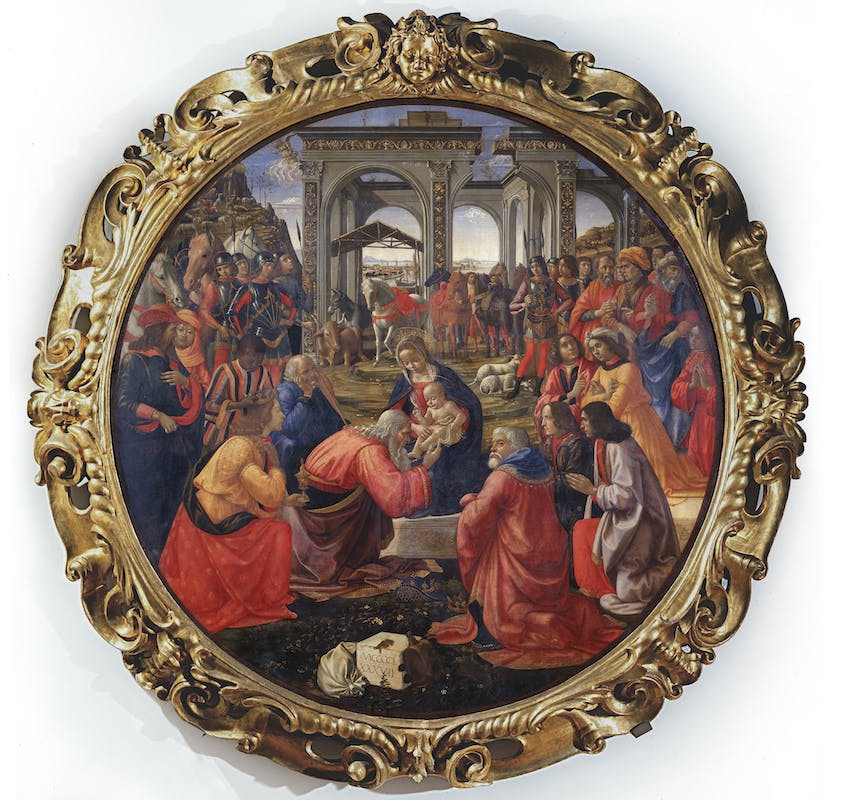 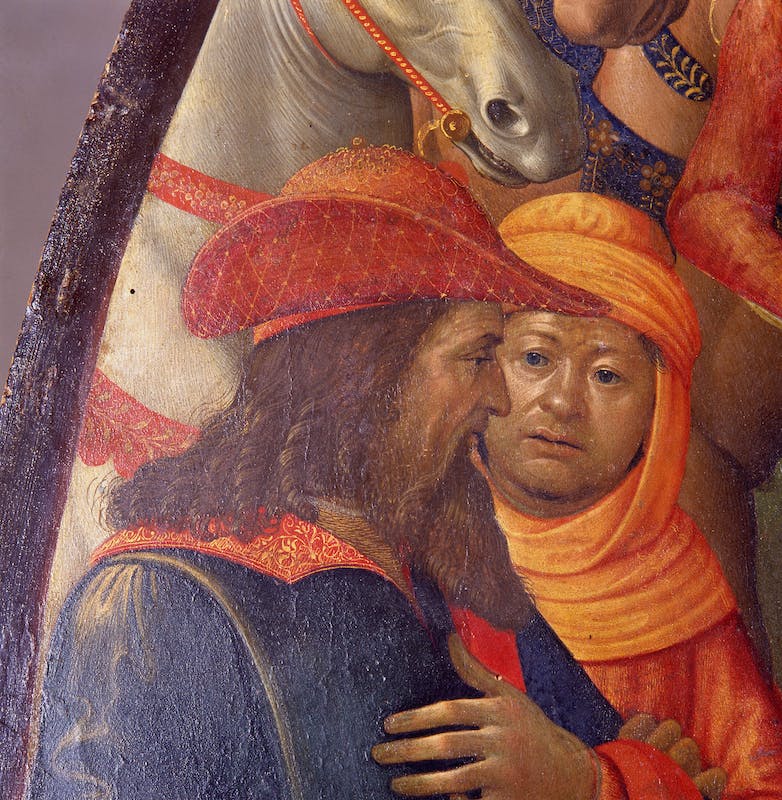 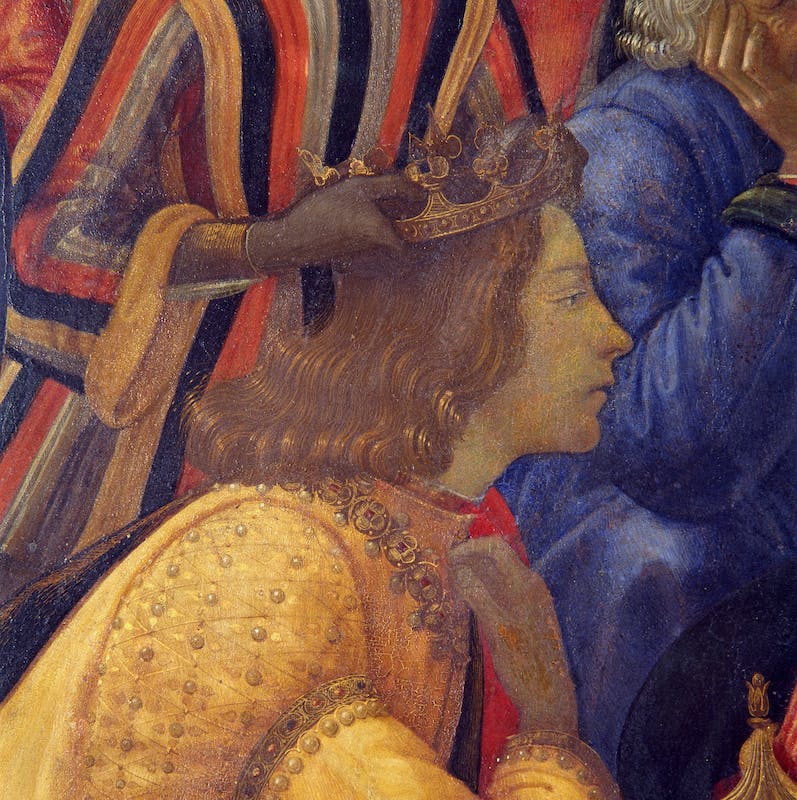 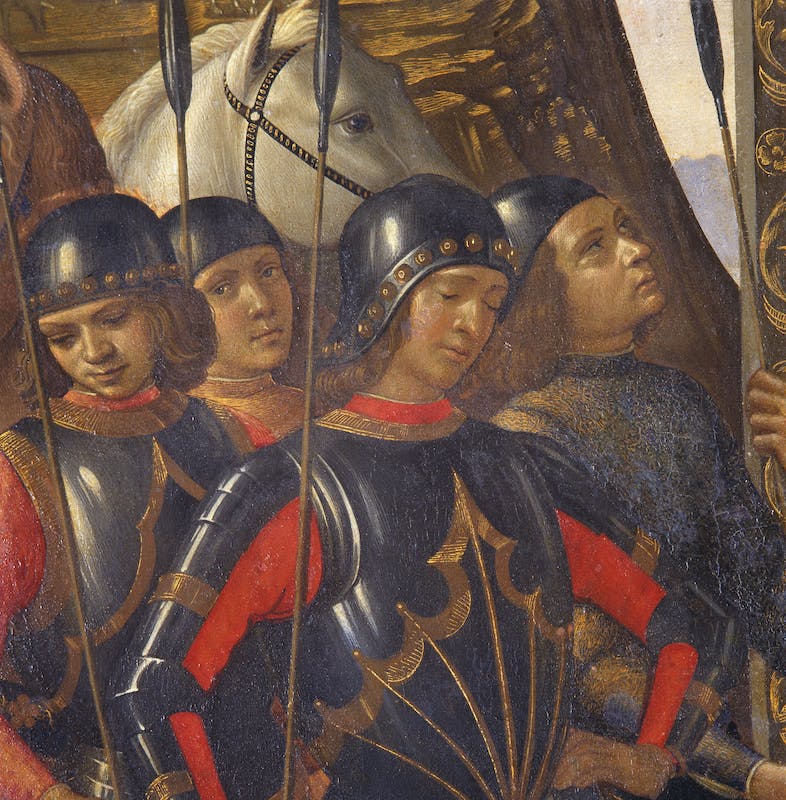 The homage of the Magi to the newly born Saviour is set against a backdrop dominated by the ruins of an ancient building, with the stable where Jesus was born in the middle. It is a recurring setting in paintings of the Nativity and the Adoration of the Christ Child, and one that alludes to the birth of Christianity and the collapse of pagan religion. The decorative friezes on the portico are inspired by ancient Roman art, which Domenico Ghirlandaio was able to admire on his travels to Rome where, among other things, he worked on the decorations of the Sistine Chapel in St Peter’s Basilica.

The Virgin and Child are the focus of the composition; the Wise Men are kneeling before them, recognizable by the crowns that they have placed at the feet of the Saviour. A servant, whose dark skin emphasizes that the kings and their large following have come from the East, is removing the diadem from the head of the youngest Magi.  The crowd is arranged in a wide semi-circle, echoing the circular shape of the panel, characteristic of a type of painting created for private worship and destined for the homes of the most wealthy, often on occasion of marriages of birth. The imposing dimensions of this work seem to indicate that it is a commission of the highest level. There is a tendency to identify it as the “tondo” of the Adoration of the Magi, described in a 1498 inventory for Palazzo Tornabuoni in Florence, in the room of Lorenzo Tornabuoni (1468-1497). The subject of the Nativity and the date, MCCCCLXXXVII written on the marble block in the foreground, lead us to think that this panel could have been painted on the occasion of the birth of Giovanni Tornabuoni, first born of Lorenzo Tornabuoni and Giovanna degli Albizi, born in 1487. The head of the family, Lorenzo is possibly recognizable as the man with long black hair, kneeling on the right.

As in murals, even the smaller size of paintings on panel, Ghirlandaio maintains his capacity to orchestrate complex crowd scenes, with many details and costumes, numerous portraits and natural pieces depicted with extraordinary verisimilitude, thanks to the lesson learned from Flemish painting. In the foreground, as well as the marble block inscribed with the date, there is an almost still life consisting of a canvas sack, a traveler's flask and a glasses case, all travel items.