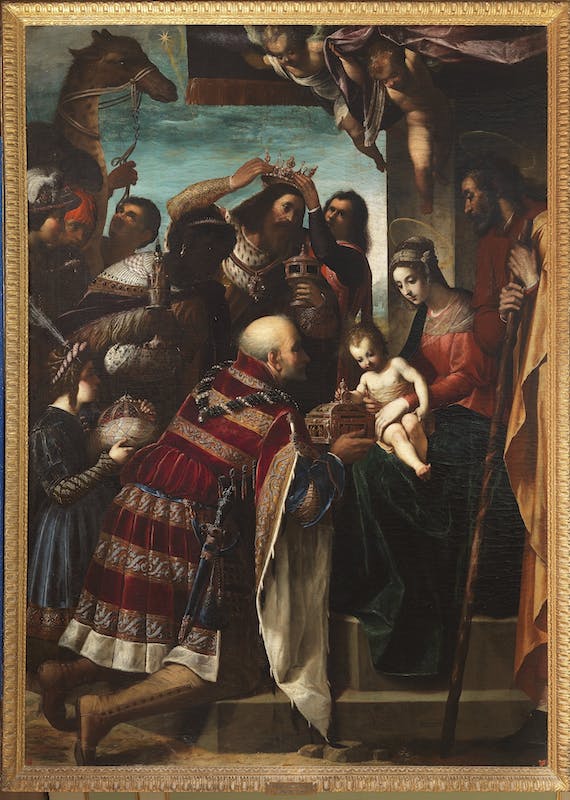 This is an en plein air scene, set against a background of sky with fading tones, dominated by a star that stands out like a jewel against the deep blue of the clouds. The Magi and their pages are arranged along two diagonal lines, meeting at the central group with the Virgin, Child, and St Joseph under an elegant canopy. The asymmetrical nature of the composition is based on a type that was widely used in the Veneto area, and also, in the last two decades of the century, by Carracci for the Bargellini altarpiece and the Madonna enthroned with Saints Matthew, Francis and John the Baptist (Dresda, Gemaeldegalerie). However, Jacopo Ligozzi did not share the same soft naturalism and the warm atmosphere of the Emilian artists: his is more of a static painting, with a bold mannerist impact, where the protagonists are substantially blocked in their pose, taking part in the sumptuous exhibition of fabrics, wall coverings and jewels that the painter studied carefully in his book of sketches for costumes and fabrics.

The altarpiece comes from the church of Santissima Concezione belonging to the Franciscan Tertiary nuns of Suor Angiolina di Foligno, present in Florence since the start of the 15th century, and it reached the Florentine galleries after the Leopold abolition which forced the conversion of some convent buildings into lay institutions destined to the education of young girls and other assistance activities. The commission for this painting is part of the group of works ordered in the final decade of the 16th century, thanks to a bequest from  Luigi di Roberto Mormorai, which allowed the church to be renovated. The Adoration of the Magi was to hang in one of the altars in the presbytery. Ligozzi worked on this commission about twenty years on from his arrival in Florence and after many years spent almost exclusively in the service of the Medici grand dukes, first because of the sumptuous album of botanical drawings and then as an elegant interpreter of historic and allegorical subjects for the Court apparatus.