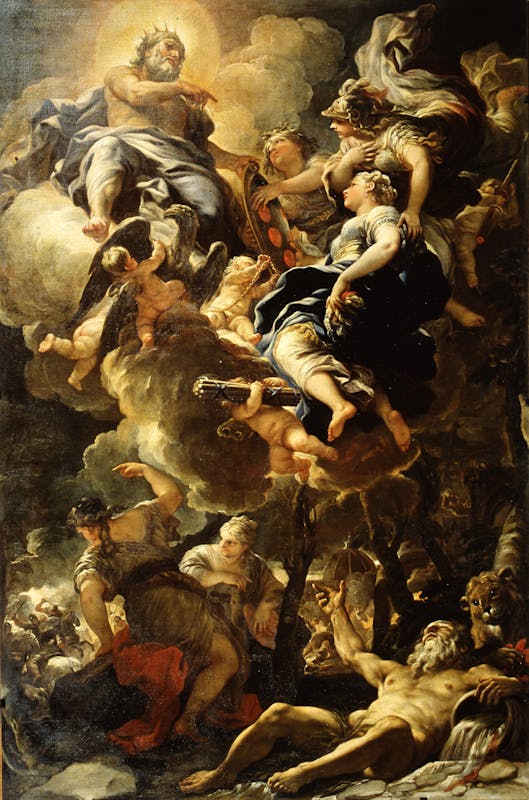 It is a “soffitta” (i.e., a canvas for a ceiling), which the Neapolitan artist painted for what, in the 16th century, was the “Sala della guardia” in the apartment of Prince Ferdinand, son of Cosimo III, in Palazzo Pitti. This is now the Green Room in the Royal Apartments. It has never been removed from this location, except for restoration and then for the “Gli ultimi Medici” exhibition in 1974.

Neapolitan biographer, Bernardo De Dominici (1742-1745) narrates how grand duke Cosimo III wanted to visit the Florentine studio of Giordano to be present at the execution of the “model” for this ceiling, which was completed in just four hours: however, there is no trace of this sketch.

The canvas, signed “Jordanus” in the bottom left corner, shows a complex allegory that evokes the peace between Florence and Fiesole during the Roman period. This is also an allusion to the lasting peace established by the Medici in Tuscany, represented here by their coat-of-arms, which Jupiter offers to the Glory presented by Minerva. Lower down is the allegorical figure of the Arno and in the background, the dome of Santa Maria del Fiore.

Critics have stated that the painting dates back to the time (1682) when Giordano was called to decorate the dome of the Cappella Corsini al Carmine.