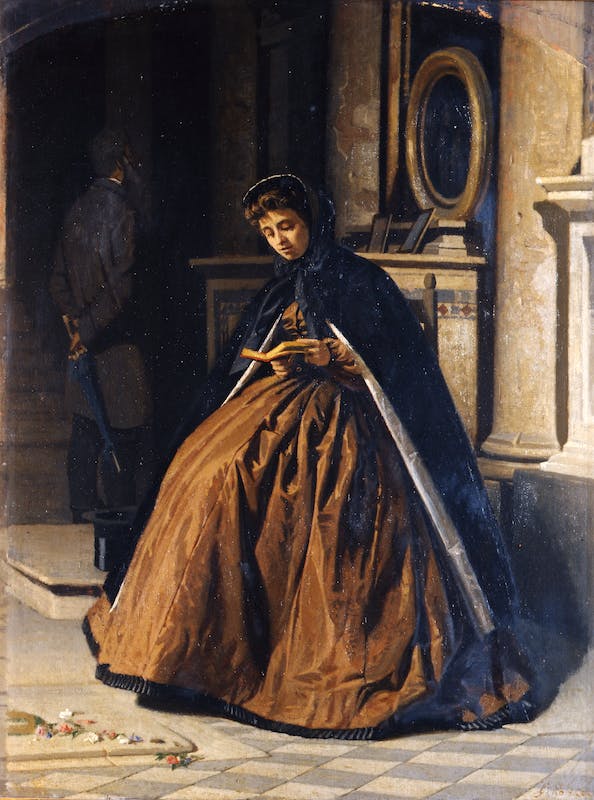 A soft light, filtering through the glass of an ancient window, illuminates a young woman engrossed in prayer in a church. A tombstone, on which some flowers are scattered, can be seen on the floor. In the background, immersed in the shadows, a man with a thick beard dressed in black is looking closely at something out of sight. The woman is wearing a taffeta gown, and the chiaroscuro effect of its drapes, comprised of folds illuminated by different intensities of light, almost make its texture tangible to the beholder. The profusion of details in the foreground becomes less intense as the image fades into the shadows of the background. The white satin edging of the cloak helps guide the beholder’s gaze towards the woman’s face engrossed in prayer. The scene is intimate and melancholic, a fragment of daily life that only a painter “of the sentiments” like Abbati could capture with such indescribable delicacy.

Giuseppe Abbati began training as an artist under the guidance of his father Vincenzo, also a painter. He then continued his studies at the Fine Arts Academy of Venice. However, is was only after he moved to Florence and began keeping company with the artists of Caffè Michelangelo that his painting reached a turning point. He soon abandoned the academic rigour of his early works, joining and taking up a well-deserved place in the Macchiaioli group.

In 1863, with Silvestro Lega (1826-1895), Odoardo Borrani (1833-1905) and Raffaello Sernesi (1838-1866) he founded the so-called “scuola di Piagentina”. Their aim was to paint in the open air in absolute tranquillity and intimacy, far from the noisy city life. At the time, this area along the Affrico, which is now densely populated, was wide open countryside, making it an ideal location for meditative painting. This painting, created in 1866, is one of the works that sealed Abbati’s success. Displayed in the same year at the exhibition staged by the Florentine Società d’Incoraggiamento, it was acclaimed by the critics and then purchased by the Ministry of Public Education to increase its new collection of contemporary sculptures and paintings. And this very group of works, exhibited from 1868 to 1912 in the Gallery of the Fine Arts Academy in Florence, helped form the current collection of the Gallery of Modern Art in Palazzo Pitti.

The woman in the painting is Teresa Fabbrini, wife of Diego Martelli (1839-1896), art critic, collector and the artist’s friend. For many years, Diego hosted Abbati and all the members of the Macchiaioli group in his home in Castiglioncello, sustaining and promoting their revolutionary painting.

Giuseppe reciprocated this friendship by gifting him an intense, full figure portrait of Teresa, dressed in the same cloak as the one depicted in the Oration.