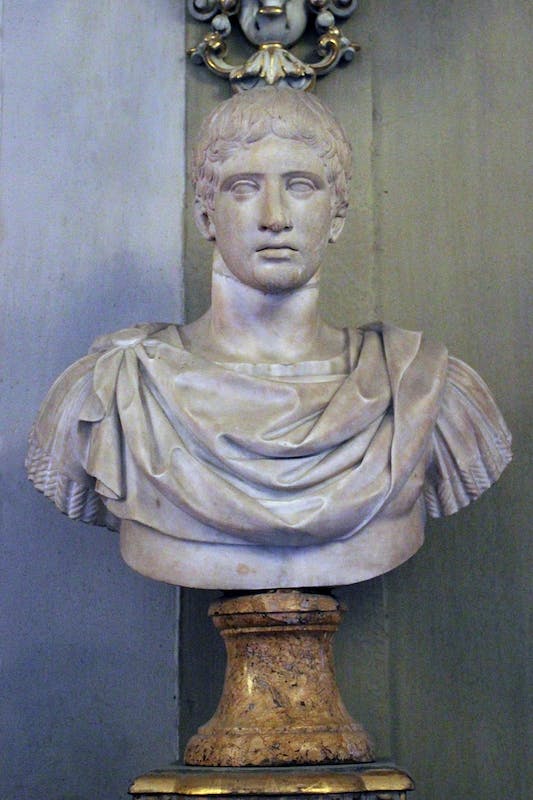 As seen today, the work comes from the assembly of an ancient head with a modern bust, as was common practice in the 16th century. This is at the origin of the very concept of “restoration”, understood as integration of a fragmentary object, so as to give it some completeness, legibility and a good aesthetic condition.

The male head, where the right ear, a part of the left ear and the solid neck are to be attributed to the modern restoration, is set on a bust wearing a breastplate (lorica) and a military cloak (paludamentum). The addition has paid specific attention to the original placing of the head, looking at the little that remained of the original neck and its muscles; this allowed the sculptor/restorer to create a figure whose face is looking to the right.

The Florentine marble is a copy of the Doryphoros of Polykleitos, one of the most copied Greek statues during the Roman period, and proof of the artist’s fame.  In the central period of the 5th century B.C., this work gave shape to the artist’s theories on anatomical study and on the representation of the male nude, according to a calibrated effect using proportions, contrasting elements and symmetrical parts. Originally understood, probably as a depiction of Achilles, the sculpture became known as the “Doryphoros” (from the Greek for “spear bearer”) and as an incarnation of absolute physical perfection, to the point of being frequently used to decorate gymnasia and other structures dedicated to exercise and care for the body.

The Florence copy stands out for its strong adherence to the Greek model, providing an exact copy of the detail of the hair: this execution also has the clean-cut lines and formal composition that suggests the period of the second decade of the first century A.D., the late Augustan era or the early years of Tiberius’ reign.